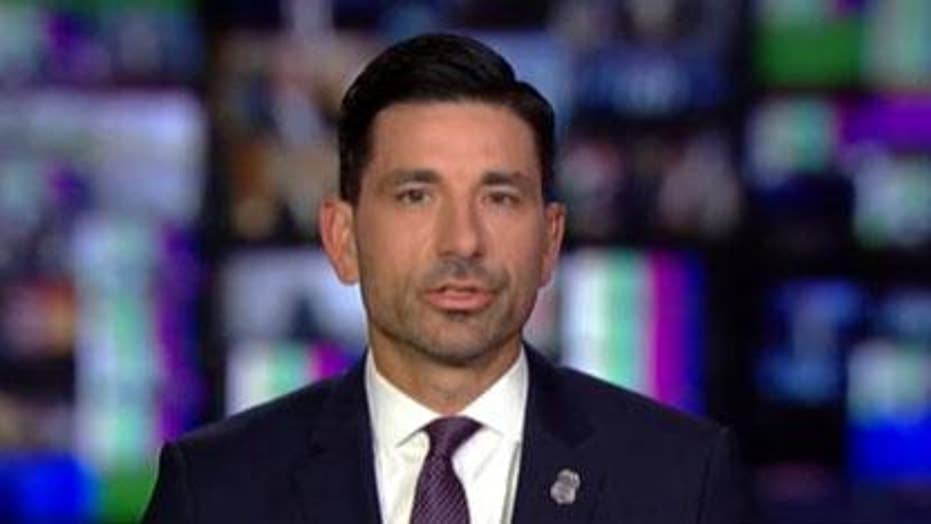 Chad Wolf, acting DHS Secretary, discusses what new steps the U.S. is taking to combat the border crisis and explains what's behind the big decline in border apprehensions

Illegal crossings at the U.S.-Mexico border plummeted after the Trump administration required asylum seekers to wait in Mexico for court hearings in the U.S., according to a report.

When the policy took effect in the Border Patrol's Yuma sector in May, arrests hit 14,000. By October, they had fallen 94 percent, or around 800, and have stayed there since, making Yuma the second slowest of the agency’s nine sectors on the U.S.-Mexico border, according to statistics cited by The Associated Press.

There have been several reasons for the recent drop. Anthony Porvaznik, chief of the Border Patrol's Yuma sector, said the so-called Migration Protection Protocols have been a huge deterrent, based on agents' interviews with people arrested.

Crews working at a portion of border wall under construction in Yuma, Ariz. (AP, File)

In the neighboring Tucson sector, arrests rose each month from August to December, bucking a border-wide trend and making it the second-busiest corridor after Texas' Rio Grande Valley. Porvaznik attributed Tucson's spike to the policy's late implementation.

Over 55,000 asylum-seekers were returned to Mexico to wait for hearings through November, 10 months after the policy first took effect in San Diego.

The immigrants were from more than three dozen countries, but nearly two out of three were Guatemalan or Honduran, according to Syracuse University's Transactional Records Access Clearinghouse.

Critics have said the policy was unfair and exposed asylum-seekers to extreme violence in Mexican border cities, where attorneys could be difficult to find.

The American Civil Liberties Union and other groups asked to put the policy on hold during a legal challenge. The U.S. 9th Circuit Court of Appeals heard arguments Oct. 1 and has not indicated when it may decide.

This past Tuesday, critics won a separate lawsuit when a federal judge in San Diego said asylum-seekers being returned to Mexico from California deserved access to hired attorneys before and during key interviews to determine if they could stay in the U.S. while their cases proceeded.

In Yuma, asylum-seekers have been held in short-term cells until space opened up to be returned to Mexicali through a neighboring California sector.

While illegal crossings have dropped in Yuma, asylum-seekers still have signed up on a waiting list to enter the U.S. at an official crossing in San Luis, Arizona.

U.S. Customs and Border Protection has called the Mexican shelter managing the list to say how many asylum claims it would process each day. The shelter estimated the wait at three to four months.