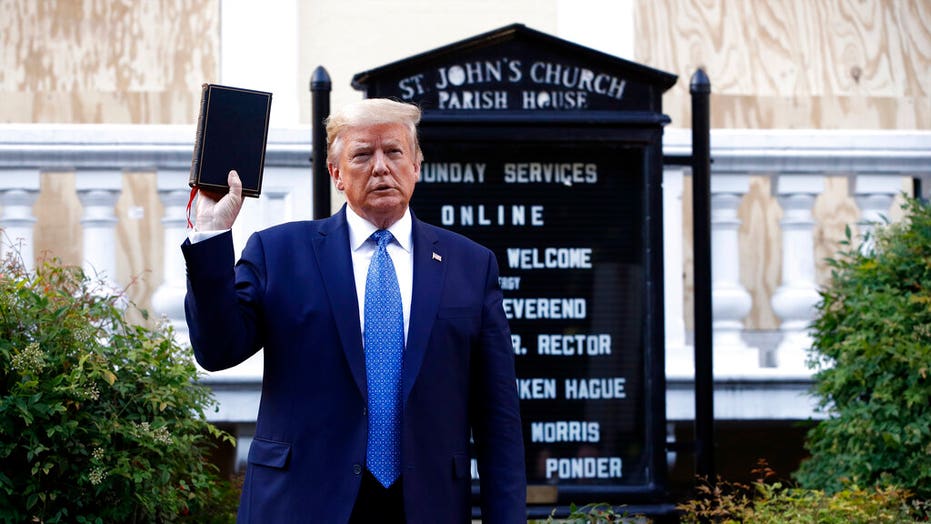 The executive order has not been publicly released but a senior administration official told Fox News it was meant to protect “people of faith around the world.” White House aide Kellyanne Conway confirmed to reporters that Trump signed the order Tuesday afternoon.

“This executive order fully integrates the president’s vision – a vigorous defense of international religious freedom rights for all – into key aspects of United States foreign policy,” the official said. “Yet again, President Trump is taking a decisive action to keep his promise to people of faith around the world.”

Earlier Tuesday, Trump and first lady Melania Trump paid a visit to the National Shrine in Washington, a place of prayer for Catholics. It came after Trump on Monday night walked out of the White House and across the street to St. John’s Episcopal Church, which caught fire amid the protests following Floyd’s death.

During their visit to the shrine, they laid a wreath under the statue of Saint John Paul II. They also visited the Luminous Mysteries Chapel, John Paul II Blood Relic, and the Madonna Icon.

But Washington Archbishop Wilton D. Gregory delivered a scathing condemnation of the president’s visit, saying he opposed letting the president visit the site.

"I find it baffling and reprehensible that any Catholic facility would allow itself to be so egregiously misused and manipulated in a fashion that violates our religious principles, which call us to defend the rights of all people even those with whom we might disagree,” the archbishop said in a statement. “Saint Pope John Paul II was an ardent defender of the rights and dignity of human beings. His legacy bears vivid witness to that truth. He certainly would not condone the use of tear gas and other deterrents to silence, scatter or intimidate them for a photo opportunity in front of a place of worship and peace.”

WHAT POWERS DOES THE PRESIDENT HAVE TO USE MILITARY TO QUELL DOMESTIC UNREST?

On Monday night, the president visited St. John’s, holding up a Bible and posing for a photo outside the church which caught fire Sunday night. Prior to his visit -- and a mandated curfew in the city -- law enforcement took steps to move protesters out of Lafayette Park.

Some Episcopalian leaders accused the president of using the church for a photo opportunity and expressed outrage that law enforcement dispersed the crowd.

“Let me be clear. The president just used a Bible in a sacred text of the Judeo-Christian tradition and one of the churches of my diocese without permission as a backdrop for a message antithetical to the teachings of Jesus and everything that our churches stand for,” Bishop Mariann Budde said on CNN. “And to do so, as you just said, he sanctioned the use of tear gas by police officers in riot gear to clear the church guard. I am outraged.”

However, the veracity of Budde's claims has come under scrutiny, as the U.S. Park Police told WTOP protesters were pushed back because some were attacking police officers -- not to clear the way for Trump. The outlet also cited sources saying tear gas was not used.

“A source says tear gas was never used -- instead smoke cannisters were deployed, which don't have an uncomfortable irritant in them,” reporter Neal Augenstein tweeted. “And, the source says Park Police didn't know President Trump would be walking across the park several minutes later.”

Still, Budde said the president did not use the church visit as an opportunity to pray, and her diocese distances itself from the “incendiary language” of the president.

In a speech just before, Trump promised to take “immediate action” to deploy “all available resources” to quell the riots and stop looting across the country,  threatening to deploy the military if states don’t send in the National Guard.