Ten special operations veterans are preparing for a world-record attempt to skydive into all seven continents in seven days while raising funds for a nonprofit that gives educational scholarships to Gold Star families.

EDITOR'S NOTE: This story is being republished in light of the veterans' upcoming New Year's Eve meet-up in Chile before venturing out to complete their jumps.

Ten special operations veterans are preparing for a world-record attempt to skydive into all seven continents in seven days while raising funds for a nonprofit that gives educational scholarships to Gold Star families.

"We want to go as fast as possible so that it's hard for anybody to break our record," retired Army Ranger Jariko Denman told Fox News with a grin. "And just the more rad it can be is more visibility on the Folds of Honor foundation."

Former Navy SEAL Fred Williams parachutes in Arizona. Williams is one of 10 special operations veterans who will attempt to break a world record, skydiving into seven continents in seven days. (Photo courtesy of LegacyExpeditions.net)

The mission is called the Triple 7 expedition: Seven continents, seven skydives and seven days. If the team succeeds, they will create a new world record. The closest comparison is from 2008, when Martin Downs set the Guinness World Record for fastest time to complete a skydive on six continents — all but Antarctica — in just over eight days.

The team plans to meet in Punta Arenas, Chile, on New Year's Eve. Then they'll wait for a weather window before taking their first jump into Antarctica, the most volatile location on their list.

"We want to start the clock once we exit the aircraft there, rather than starting at the other end and being smooth sailing and then sitting in Antarctica for six days waiting for weather to clear," Denman said.

The veterans will proceed to jump into Chile, Spain, Egypt, the United Arab Emirates, Australia and Florida as fast as possible. A documentary team led by Daniel Myrick (The Blair Witch Project) will follow their journey.

HOW SKYDIVING RECORD ATTEMPT AIMS TO GET VETERANS ‘EXCITED AGAIN’: 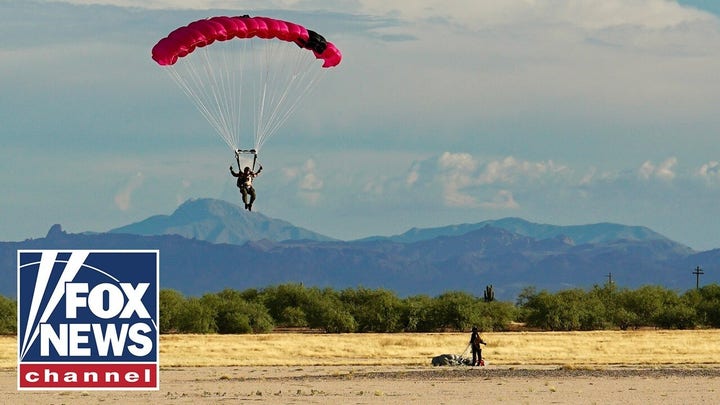 But the flashy feat is more than just another checkmark on Denman and his teammates' bucket lists. They aim to fundraise enough money to pay for 1,400 educational scholarships through Folds of Honor, a nonprofit serving the spouses and children of fallen service members and first responders.

Folds of Honor's mission hits home for Denman. This month marks 17 years since one of his close friends was killed in action, leaving behind a young son who is now 22 years old.

"His son had to figure it out when it came to getting his education taken care of," Denman said.

The global war on terror is still front and center for many Americans, Denman said, but "every single day it's getting more and more and more forgotten."

He worries that the children of service members killed at the end of the war will be forgotten by the time they head to college and said Triple 7 wants to "fill the piggy bank for Folds of Honor" as much as possible before that happens.

The Triple 7 expedition is raising funds for Folds of Honor, a nonprofit providing scholarships to the spouses and children of fallen service members and first responders. (Arizona National Guard photo by Sgt. Lauren Twigg)

Triple 7 is the brainchild of former SEALs Mike Sarraille and Andy Stumpf, who now run the adventure firm Legacy Expeditions. Stumpf is no stranger to high-profile, adrenaline-pumping feats, breaking the record for abosulte distance flown in a wingsuit in 2015.

During his Army career, Denman did plenty of static line jumps where the opening mechanism of the parachute is connected to an aircraft and the parachute opens automatically as its wearer falls. But he had never experienced freefall until BRCC sent him and several other employees to freefall school earlier this year.

"I really, really, really did not enjoy jumping freefall when I started," he said. "But I just knew, most things in life that I really enjoy, were really horrible at first."

He pushed through and now finds skydiving to be "incredibly therapeutic" and "life inspiring."