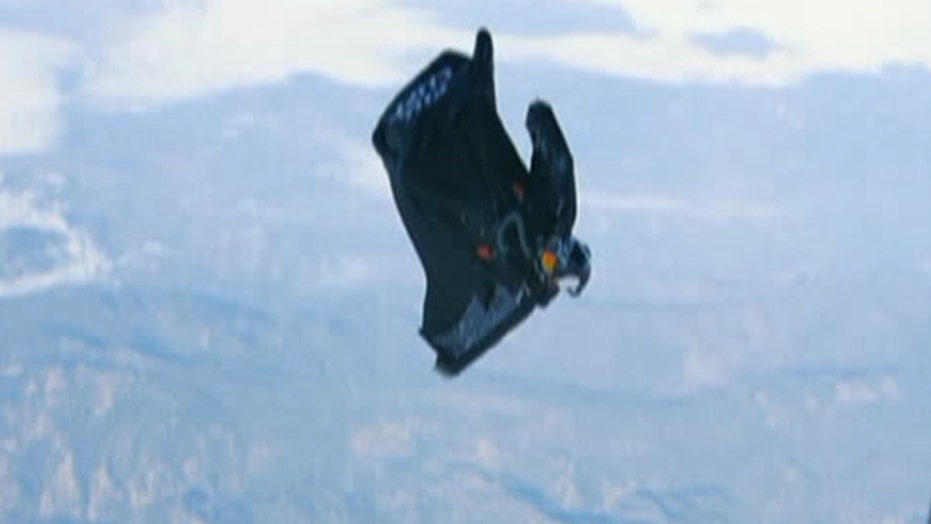 Hands on look at record-breaking wingsuit

Retired U.S. Navy SEAL Andy Stumpf risked his life to support the SEAL community and set a global record in a death-defying feat earlier this year.

Armed only with a wingsuit and a whole lot of courage, Stumpf jumped from an altitude of more than 36,500 feet, exiting a plane travelling more than 230 mph. He used a wingsuit made by Squirrel reach speeds above 140 mph.

The prior world record was 17.83 miles absolute distance traveled in a wingsuit – this “Man on a Mission” travelled 18.257 miles.

Wingsuit flying is one of the world’s most dangerous sports and tragically claims several dozen lives a year. This veteran took on the dangerous feat to honor friends and families of fallen warriors and to raise awareness and funding for the Navy SEAL Foundation.

Stumpf told FoxNews.com what it was like leaving the aircraft. “I was going for a max distance. I wanted to get out of the aircraft and fly fast and efficient and get as far as I could and then I did [a barrel roll] on exit,” he said. “The plane going as fast as it could possibly go. I got out in the suit. The suit is large. It's the largest suit on the market. And I went out and it was going faster than I could control so I had a little bit of a wild ride for about six seconds. And then I got on with business.“

Once in the air, it takes a great deal of strength to control the wingsuit’s flight. “It’s an isometric hold, so I’m literally holding resistance against the wind the entire time and there’s a finite amount of time that you can do that,” he said.

How does the tech work?

Stumpf broke down how the wingsuit works. “[People] are surprised by how complex they are and then again how simple. You can look at a wingsuit like an aircraft wing. So speed is a wingsuit’s friend. The faster you can go. The more potential lift you have. The only difference is it is not metal creating the wing, it's the human body.”

Related: F-35 fighter pilots are gearing up for the new planes virtually

The world record holder explained how he starts. “When everything is zipped up and it’s smooth and about creating as little drag as possible … I get inside via these big zippers,” he added. “The zippers are important because it separates the suit into its three pieces ... each one of the wings is fed by a ram air inlet.”

What happens next? “The ram air comes in … the wing actually inflates. Inside the wing there’s a baffle system that allows air to pass through and it stays rigid. So once the wings are open, you can actually relax and it would probably be flying at about 60 percent of its potential.”

Stumpf also addressed how a wingsuit flyer obtains speed and direction. “Once you start changing your body position. Really flattening yourself out and trying to look like a two by four from the side. Now you’re talking about increasing lift and increasing your speed.”

And is there a Harry Potter Wand in the wingsuit? “My hand is grabbing onto a gripper. I like to call it a Harry Potter Wand … that’s what my kids think it looks like. Your hand is on the outside and it can help you pull tension on the suit you can deflect it just a little bit to change the shape of the suit,” he said.

Stumpf worked closely with the Skullcandy Human Potentials Lab. Preparation for breaking the world record also involved prep outside a gym. “A lot of it is getting the suit on and going to the drop zone and training and jumping as much as you possibly can,” the former SEAL said.

Does Navy SEAL training provide an advantage in the extreme sport of wingsuits?

“The biggest benefit I got from the jump training while I was in the military was just the experience and comfort of leaving an aircraft in flight,” Stumpf explained. “When you first start jumping you’re overwhelmed with ‘I’m about to jump out of an airplane’ - and time seems to process really fast. “

“And the more experience you get underneath your belt, you kind of slow down a little bit, you develop confidence,” he added. “I wasn’t worried about having a cutaway or a parachute malfunction because I had those when I was in the military. Time in the saddle in the military, that helps give you that emotional calm.”

Why take on such a dangerous challenge?

Stumpf is on a mission is to raise $1 million for the Navy SEAL Foundation’s Survivor Support Program for 2016.

“Since I can’t [serve as a SEAL] myself anymore, I was struggling with what I could do to still be involved and have an impact,” he explained. “I realized the best thing I could possibly do was support the guys and the families who are still either overseas or they’re on call to go overseas and I don’t foresee that ending anytime soon.”

You can learn more about Stumpf’s mission and support it here: