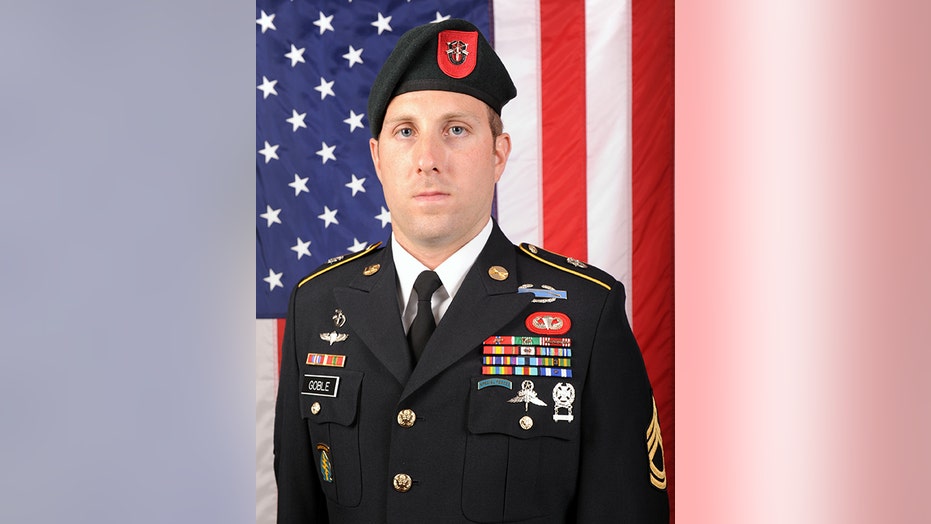 Tributes have poured in for an Army Special Forces soldier who was killed in action Monday in Afghanistan, with friends and family hailing him as a "true American hero."

Sgt. 1st Class Michael Goble, 33, of Washington Township, N.J., was assigned to the 1st Battalion, 7th Special Forces Group at Eglin Air Force Base, Fla., the Department of Defense said in a statement Monday. He was engaged in combat operations in Afghanistan's Kunduz Province when he suffered fatal injuries. The Taliban claimed responsibility for the attack amid ongoing peace talks with American officials.

Goble was on his final tour of duty when he was killed and was set to come home in less than a month, according to NJ.com.

A GoFundMe account set up for his girlfriend, Jennifer Albuquerque, and his daughter, Zoey, raised more than $36,000 in less than 24 hours.

"We lost a true American hero yesterday. Anyone that crossed paths with Mike, was truly blessed," a post on the site by Lisa Barker read. I have never met a soldier that was more passionate and patriotic than Mike Goble. He loved this country endlessly, and paid the ultimate sacrifice for it, fighting for our freedom"

Assemblywoman Holly Schepisi, who represents Goble's hometown, said in a Facebook post: "Today I found out Westwood and Washington Township lost another son, brother, father while fighting for the US military in Afghanistan.

BLACKBURN ON 'AFGHANISTAN PAPERS' FALLOUT: IT'S TIME TO INVESTIGATE

"While most of us are sitting down to Christmas dinner trying not to argue about trivial things with relatives we haven't seen in a while, SFC. Michael Goble's family will be meeting his body on the tarmac as he returns 3 weeks early from his fourth and final tour of duty.

"Michael was a 2004 Westwood High School graduate who grew up in Township. A member of special ops, this was his fourth and last tour of duty in Afghanistan. Please say a prayer for him and his family during this incredibly sad time and thank him for making the ultimate sacrifice for us all."

Gov. Phil Murphy and Acting Gov. Sheila Oliver issued a joint statement on Goble's death, saying he "represented the best values of our Armed Forces and of New Jersey -- dedication, fearlessness, and excellence."

Goble's group commander, Col. John Sannes, said Monday: "Sgt. 1st Class Goble was more than just a member of the 7th Special Forces Group, he was a brother to us, and a beloved family member to the Northwest Florida community."