Nearly 200 protesters chanted outside a Chicago courthouse Wednesday as jury selection began in the first-degree murder trial of a white police officer accused of killing a black teenager.

Prospective jurors were given questionnaires to fill out. Though the documents were sealed, they likely were asked how closely they followed media coverage of the 2014 shooting and whether they had seen the dashcam video showing Officer Jason Van Dyke firing 16 shots at 17-year-old Laquan McDonald, who was holding a knife but apparently walking away from officers.

Van Dyke showed up to court about an hour before the scheduled start of a protest. He was wearing a bulletproof vest and surrounded by supporters including Fraternal Order of Police President Kevin Graham.

A mix-up over seats kept members of McDonald’s family out of the courtroom, which was packed with potential jurors and journalists. While McDonald’s mother, Tina Hunter, made it inside, several others were shut out.

Outside, about a half dozen cops were stationed on the roof of the parking ramp across the street from the courthouse. Helicopters circled overhead while protesters banged drums and gave speeches. 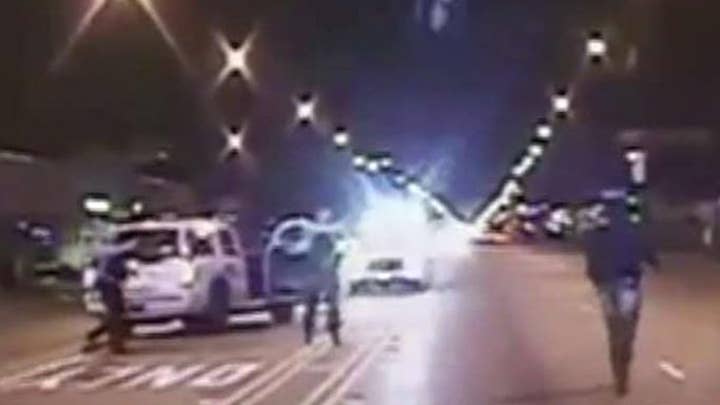 Frank Chapman of the Chicago Alliance Against Racist and Political Repression told the Chicago Sun-Times that the crowd was there to demand justice for the slain teen.

“The only way he’s going to get justice is if Jason Van Dyke is convicted of the first-degree murder that he committed,” Chapman said.

The case against Van Dyke has polarized much of Chicago.

Mayor Rahm Emanuel, who announced this week he would not seek a third term, came under intense scrutiny for trying to block the release of the dashcam footage. He and his team of city attorneys released it only after a judge in 2015 ordered them to do so.

Van Dyke's attorney, Daniel Herbert, has claimed there's no way his client could get a fair trial, and he pointed the finger at Emanuel. “When the mayor of the city in which the pool of jurors that we would draw from has taken such an adamant stance, it makes it extremely difficult for us to get a juror in here that is not predisposed to a finding of guilty.”

Herbert added, “We think that at the end of the day we’re going to present some very compelling evidence to demonstrate that it’s impossible for my client to get a fair trial in this case.”

The grainy video showed McDonald walking down a Chicago street with a knife in his hand. As he walked across the street with his back turned away from officers, Van Dyke jumped out of his car, pulled his 9mm Smith & Wesson handgun and started shooting.

It took him 15 seconds to fire 16 shots, some of whom hit McDonald after he already was on the ground.

In the days that followed, many activists and community leaders accused the mayor and police department of trying to cover up the incident. The ill-will and mistrust between the community and the cops only grew after the dashcam video was released.

The police union claimed McDonald was holding a knife and approaching officers when he was gunned down. However, the graphic video showed McDonald veering away from officers.

The investigation into the Chicago PD was one of the largest in the nation. The report also slammed the city and authorities for insufficient training and a failure to hold power-hungry officers accountable.

Former Chicago Police Superintendent Garry McCarthy told Fox News at the time that the Justice Department never interviewed him for its report. He suggested it was because "my narrative doesn't fit what they want to say. ... The politics is the strongest pull."

Also in 2017, three police officers were indicted on charges of conspiring to cover up the fatal shooting.

The indictment claimed the veteran cops tried “conceal the true facts of the events surrounding the killing of Laquan McDonald.”

Special prosecutor Patricia Holmes said in a statement that “the indictment makes clear that these defendants did more than merely obey an unofficial ‘code of silence.’” She claimed the officers lied about what took place to prevent independent criminal investigators from uncovering the truth.

The officers have pleaded not guilty. A bench trial has been scheduled for later this year.