Transgender rights activists clashed with authorities in New York City on Monday during a protest against a "Let Women Speak" event, which they claim incites hatred against the transgender community.

The clashes unfolded at City Hall Park, near City Hall in Manhattan, the New York Police Department told Fox News Digital. A police spokesperson said nine people were arrested and would most likely be given a summons and released.

Monday's event was part of the "Let Women Speak" tour being led by Kellie-Jay Keen, a British women’s rights campaigner. The tour is being hosted in several cities and is intended to give women the chance to speak about the effects of gender identity ideology.

A crowd of transgender rights activists gathered Monday in New York City to protest against a speaking event they deemed as transphobic. (FreedomNewsTV)

In Monday's footage, the NYPD can be heard telling the demonstrators to disperse because they were blocking pedestrian traffic. Many appeared to ignore the order and some were seen confronting uniformed officers.

One person was seen ringing a bell right next to the ear of a police officer and in the face of others.

Several anti-TERF rallies with similar clashes have been held around the country.

Last week, activists tried preventing women from speaking at a "Let Women Speak" event in Washington, D.C. Some used bullhorns and sirens to drown out Keen and other women attending the event, the Post Millennial reported. 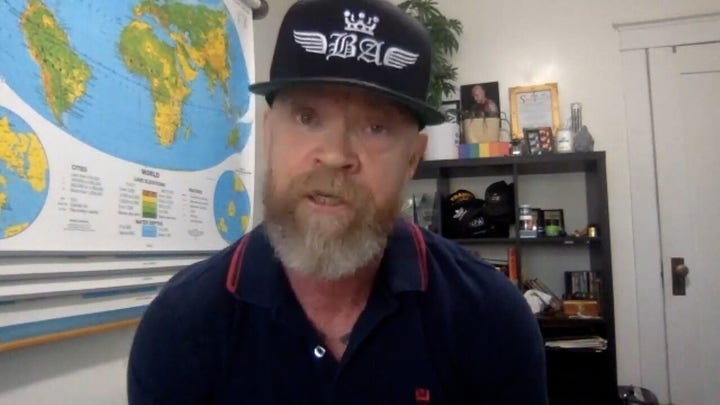 In a video, Keen said she couldn't get to Monday's event and that the NYPD refused to escort her.

"My event's going on without me," she said. "I think this is indicative of the United States in 2022 and how they feel about women speaking."

In October, Keen said she was canceling a tour stop in Portland, Oregon, following threats from Antifa and transgender activists.

"I've been told by both locals in both Seattle and Portland that Antifa has killed people and kind of gotten away with it," she said. "I've also gotten communication from the police that basically says ‘You’re not permitted to have an event.'"

Some celebrities have also been accused of being hostile to the transgender community over their views on gender identity.

A demonstrator rings a bell near the ear of an NYPD officer during a Monday protest near City Hall.  (FreedomNewsTV)

In July, singer Macy Gray was accused of transphobia over her definition of a woman and was called several names, including a "TERF." "Harry Potter" author J.K. Rowling has also been accused of being a "TERF" for her stance on gender identity as well and has been subjected to death threats.