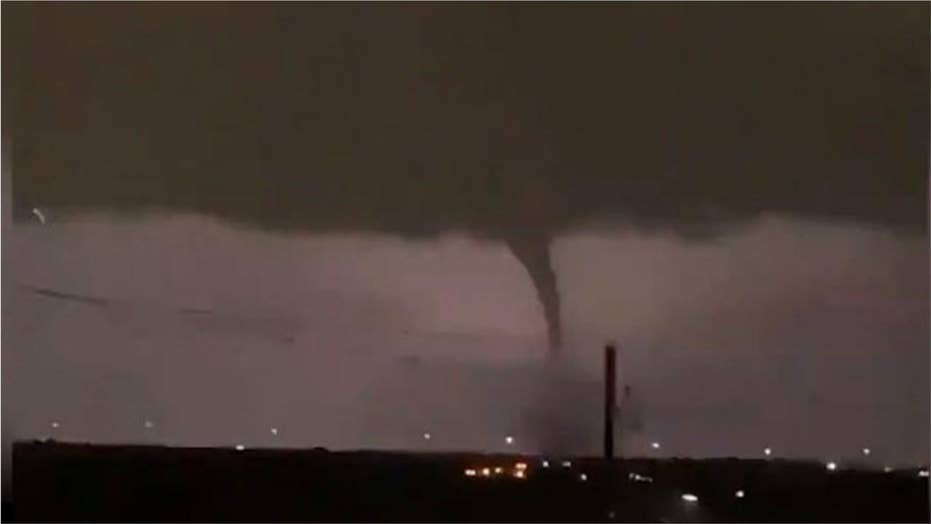 A tornado ripped through Dallas, Texas near the home of President Bush and First Lady Laura Bush. Thousands are now without power, gas leaks have also been reported.

A tornado ripped through Dallas Sunday night, leaving a trail of heavy damage across the area, including collapsed buildings and downed power lines.

The damage, estimated to have stretched 17 miles long, left more than 95,000 people without power. While no major injuries have been reported, first responders were going door to door in some neighborhoods to check on residents, according to The Dallas Morning News.

The National Weather Service has warned of continued high winds and hail.

Videos uploaded on social media revealed the tornado’s size and impact, including one video showing a large funnel cloud over the city. Other footage and photos showed numerous collapses and damage to homes.

Debris from trees and roofing were left on streets after light poles and power lines were knocked down by the force of the tornado’s winds. Dallas Fire-Rescue crews responded to structural collapse in northwest Dallas, the Morning News reports, as well as calls of people hurt from broken glass in their homes. A Home Depot reportedly took a direct hit, with its roof collapsing and water bursting from pipes that were ripped from the walls.

The tornado also hit near the home of former President George W. Bush and first lady Laura Bush. “They got lucky and are praying for the safety of their neighbors around DFW,” a spokesman said, according to reporter Jack Fink.

The City of Dallas released a press release early Monday announcing that it was assessing the damages and confirmed there no reported fatalities or serious injuries. The city also confirmed reports of suspected gas leaks.

"The Dallas Police Department and Dallas-Fire Rescue are assessing damaged structures and will continue to do so throughout the night," the statement said.