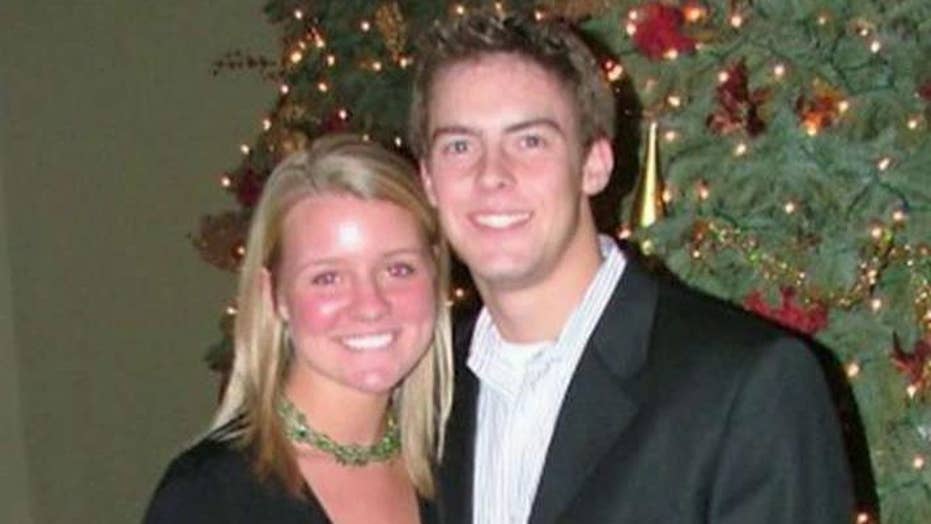 Two men have been arrested and charged with murder and other offenses in connection with the killing of an Indiana pastor's pregnant wife earlier this month and a third man could still be charged, prosecutors said during a Monday press conference.

Larry Taylor, 18, and Jalen E. Watson, 21, were booked on murder, burglary and robbery charges. A possible accomplice, Diano Gordon, was being held on an alleged parole violation. Police believe the trio robbed at least two houses before encountering Amanda Blackburn in a third house.

DNA testing pointed to one of the men charged in Blackburn's death as the person who was later recorded as using her stolen bank card, Marion County Prosecutor Terry Curry said.

Amanda's husband, Pastor Davey Blackburn, said in a statement he was "extremely relieved" by the arrest of a suspect, but said it doesn't "undo the pain we are feeling." Blackburn said investigators have told him they have a "solidly-built case."

"We are thankful to our federal, state and local partnerships that aided in the apprehension of the suspect in this terrible and senseless crime," IMPD Chief Rick Hite said in the statement. "All victims of criminal homicides deserve closure, and as a community we must send a collective message that violence is not an option. Our detectives have worked tirelessly going days without sleep to solve murders in our city."

Detectives pieced together an account of the crime in which all three men entered the Blackburn home, which was unlocked, and confronted Amanda after Davey had left for an early morning workout, Fox 59 reported.

Authorities allege that while two of the suspects left the house to withdraw money with the pastor's ATM card, Taylor raped Amanda before shooting her. The crime took place with the couple's 15-month-old son lying in his crib upstairs.

Investigators linked the suspects to the Blackburn case through ATM receipts found in a car the three had allegedly stolen earlier this month. Crime lab technicians are also analyzing a gun that was found in the yard of a home near the Blackburns to determine if it had any connection to the case.

Amanda and Davey Blackburn had moved to Indianapolis from South Carolina to found the independent Resonate Church in 2012. More than 2,000 people attended a memorial service for Amanda Blackburn the Sunday after her death.