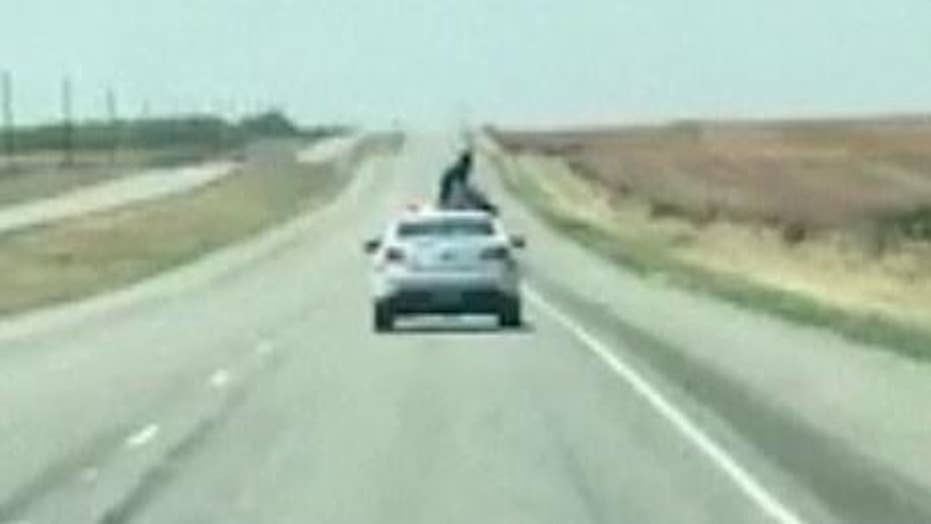 Prisoner climbs on top of police car in escape attempt

Raw video: A man being transported to jail kicked out a back window of a patrol car and climbed on top of the roof as it traveled down the highway.

A Texas prisoner who was being transferred on Wednesday managed to escape his restraints, break the patrol car window and climb onto its roof while the vehicle drove down a highway, authorities said.

The wild maneuver allegedly made by Martin Estrada, 31, was caught on tape by motorists driving behind the patrol car.

The incident occurred after a Taylor County sheriff’s deputy arrived to a facility in Wichita Falls and learned that Estrada allegedly assaulted another individual “and was being discharged for safety reasons,” the Taylor County Sheriff’s Office said on Facebook.

The inmate was sought in Taylor County for “insufficient bond” on multiple charges, officials said.

Estrada was restrained with the use of handcuffs and leg irons, the sheriff’s office said, and he and the deputy set off on the roughly 150 mile trip to Abilene, Texas.

Officials said Estrada was able to free one of his hands during the ride and proceeded to break one of the backseat windows.

“He threatened suicide unless the officer stopped the car,” the sheriff’s office said. “The officer refused, and continued on as the prisoner climbed atop the car.”

Video of the incident shows a distant shot of a person riding on the roof of a vehicle. Eventually, two other patrol cars with their lights flashing come into view, tailing the vehicle as it pulls over to the shoulder. The person atop the car is seen hopping off and into the grass off the side of the road before seemingly getting apprehended soon after.

The sheriff’s office said the deputy who was driving waited to pull over until backup arrived.

Authorities were able to get Estrada to his destination “without further incident,” the sheriff’s office said.

County jail records obtained by The Associated Press showed that Estrada was being held Thursday on various charges, including escape and unauthorized use of a motor vehicle and his bond was set at $680,000.