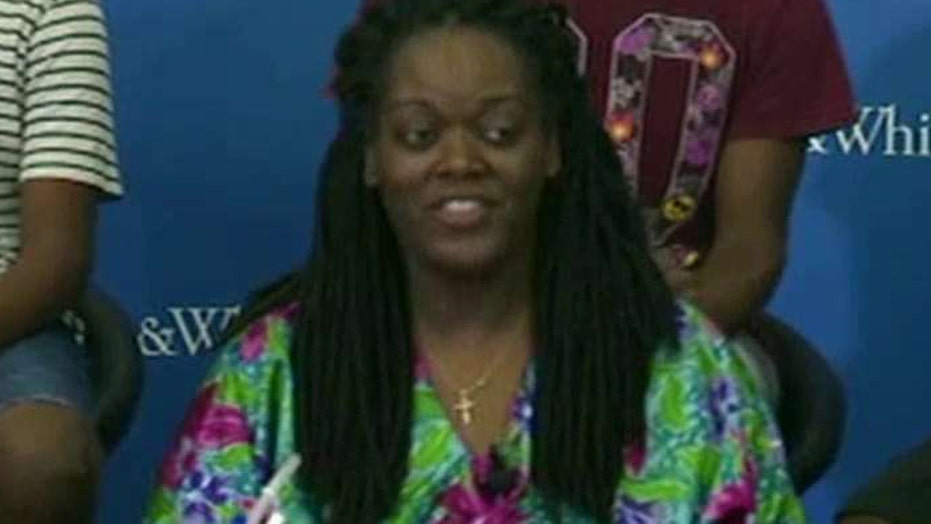 Mom shot at Dallas rally: Officer told me to run as he fell

DALLAS – A Texas woman who was wounded while shielding her sons during the attack on a Dallas protest march thanked officers Sunday and said she would go to another demonstration to show her boys that she’s not a quitter.

Shetamia Taylor, who attended the march with her four sons, thanked Dallas police for protecting her in the chaos that erupted Thursday night.

She says officers shielded her as bullets whizzed through the air around them.

"They had no regard for their own life. They stayed there with us. They surrounded my son and I," she said.

Taylor, in a wheelchair with her right leg immobilized, said that she always held police officers "in a very high place" and notes that her youngest son wants to be a cop.

"I never had an issue with police officers," she said. "If anything it made my admiration for them greater."

Taylor, who is black, said she went to the march to protest the killings of black men by police in Baton Rouge, Louisiana, and outside St. Paul, Minnesota, and previous encounters between blacks and police.

She said the attack on the march in Dallas, which killed five officers and injured seven others, wouldn't deter her from demonstrating again. She wants her sons — ages 12, 13, 15 and 17 — to know it was an isolated incident.

"I don't want them to think that I am a quitter, because I am not," she said.

Taylor said she and her sons were getting ready to leave the march when they heard two shots and saw an officer fall.

As they fled, she felt a bullet hit her in the back of the leg.

She said she tackled her 15-year-old son, Andrew, and "laid on top of him."

Two of her other sons escaped through a parking garage, while the fourth fled the gunfire with another woman he didn't know.

Taylor suffered a bad fracture of her tibia just below her right knee, one of her doctors said. It was repaired with a plate and screws, but it will be two to three months before she can put weight on her leg.

Taylor says she wonders where the country is going to go from here.

"I'm just a mother and a wife," she said. "I'm not an activist. I'm not a politician. I just want to protect my family."

She stressed that most police officers deserve praise and not all of them are "out to get us."