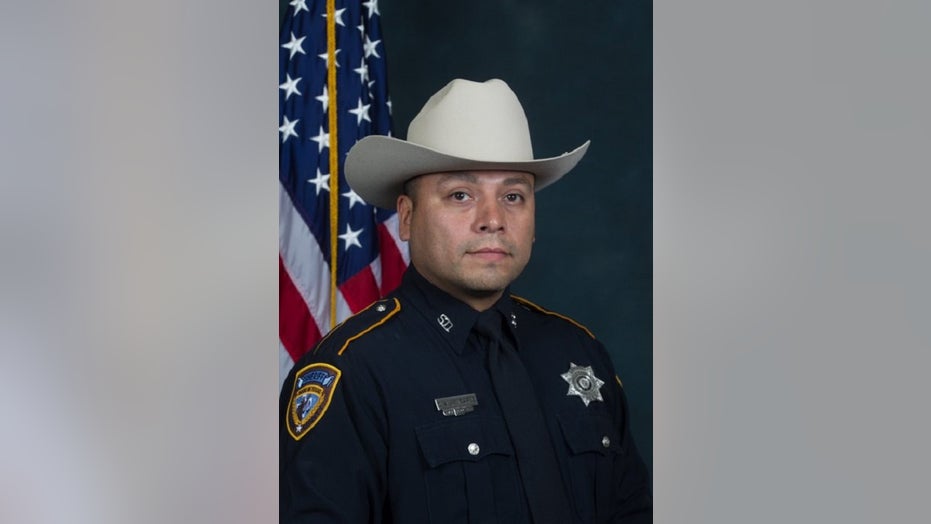 Two men have been charged in the shooting death of an off-duty Texas deputy who was gunned down after leaving a grocery store Thursday night and a third male is being sought, authorities said Friday.

Joshua Stewart, 23, and Fredarius Clark, 19, are both charged with capital murder in connection with the death of Harris County Sheriff's Deputy Darren Almendarez.

The deputy had just come out of a Joe V's Smart Shop with his wife when he saw a Nissan Altima backed up to his truck and two males under the truck, the Harris County Sheriff's Office said.

"Possibly a catalytic converter that was being stolen," Harris County Sheriff Ed Gonzalez said at a news conference Thursday night. "We're not sure. Those details are still being investigated. But, he intervened. He intervened to try to stop a crime."

Almendarez, 51, told his wife to go somewhere safe and he approached the suspect vehicle, which by then had three people inside, authorities said.

As he walked over, he was fired upon and struck multiple times. The deputy managed to return fire and shot at least two suspects,

They then fled the parking lot. Almendarez was taken to a hospital where he later died.

Stewart and Clark arrived at a hospital in the suspect vehicle a short time later with gunshot wounds, authorities said. A third male described as between 17 and 19 years of age is being sought by investigators for questioning.

Almendarez, a 23-year veteran of the sheriff's office who was most recently assigned to the auto theft division, was remembered Thursday night as a "fighter." He was recently the focus of a sheriff's office spotlight video where he offered steps to avoid buying a stolen vehicle and other tips.

At the time of his death, he had purchased groceries and was planning to have a cookout to celebrate his sister's birthday Friday, Gonzalez said.