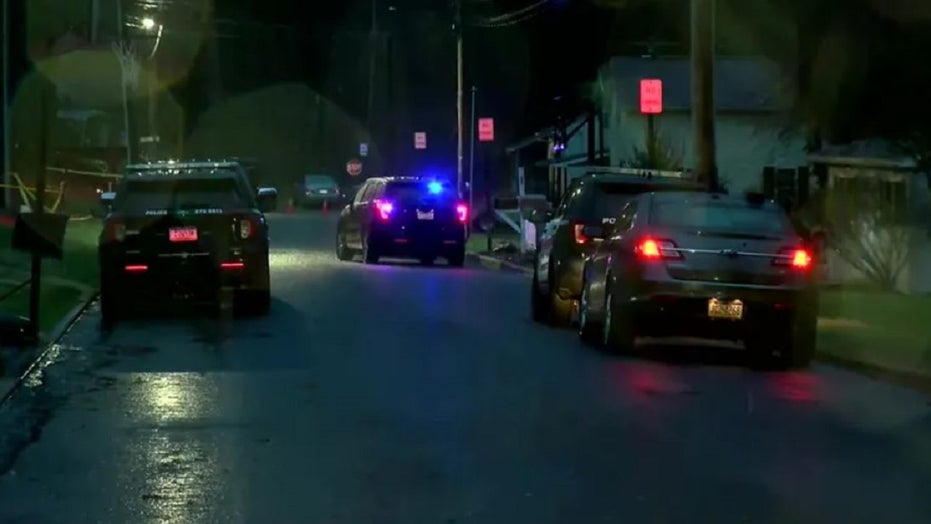 A Pennsylvania police officer and suspect were killed Thursday and two other officers were wounded, authorities said.

The shooting occurred in Lebanon, about 30 miles east of Harrisburg, where officers responded to reports of a domestic disturbance just after 3:35 p.m. at the 1100 block of Forest Street, Lebanon Mayor Sherry Capello told reporters.

Police vehicles at the scene of a shooting in Lebanon, Pennsylvania. Three police officers were shot Thursday, one fatally, while responding to a domestic incident, officials said.  (WTXF)

Just after 4:20 p.m., there was a gunfire exchange between officers and a gunman, she said. One officer and the suspect both died.

"This is an extremely difficult moment for everyone," Capello said.

Both of the surviving officers were in hospitals Thursday night. One remains in critical condition and the other was stable.

The suspect was not identified but was described by Lebanon police Chief Todd Breiner as a 34-year-old man. Authorities declined to provide information.

"Our guys are strong, but we’re human," Breiner said. "With the help of our families and every other law enforcement officer around this country, we’ll get through it.

Lebanon Mayor Sherry Capello speaks to reporters following a shooting that killed a police officer and injured three others on Thursday.  (TXF)

Capello said another news conference will be held tomorrow.

Pennsylvania state Sen. Chris Gebhard, a Republican, offered his prayers to any Lebanon officers injured and their families.

"My heart goes out to Lebanon City Police Department," he wrote. "A sobering reminder of the dangers our brave men and women in uniform face day after day. And they keep showing up, running *towards* danger anyway. My thoughts are with the officers and their families."

The Pennsylvania Democrat Party said that "tragic events like today’s are a reminder that men and women of law enforcement heroically put themselves in harm’s way every day."