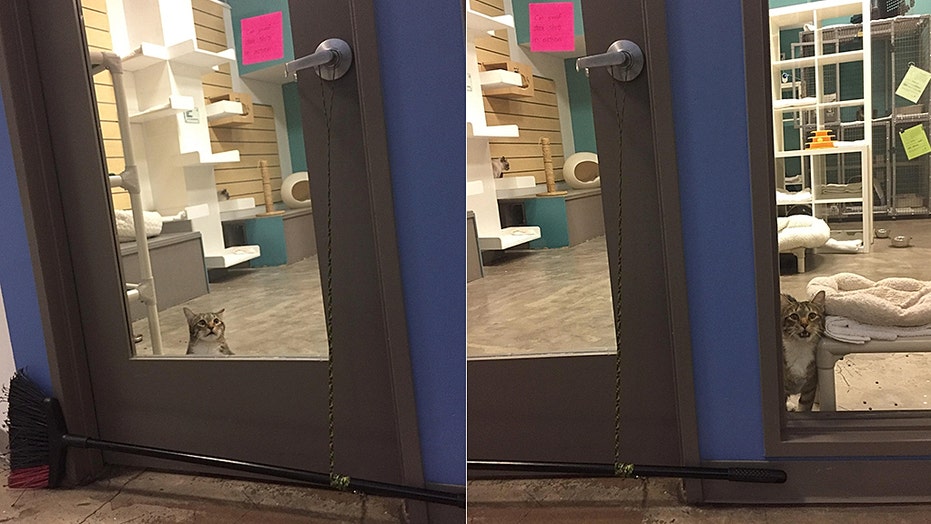 A cat at a Texas animal rescue is facing the prospect of purr-gatory after being put in solitary cat-finement for freeing all the other felines in the shelter.

Quilty, 6, "loves to let cats out of the senior room" — and was doing it several times a day — according to Friends for Life, an animal rescue and adoption organization based in Houston.

CAT CREDITED WITH SAVING BABY FROM FALLING DOWN THE STAIRS

The group wrote in a Facebook post late last month that Quilty would repeatedly open the door of the senior room. Described as a "smart, energetic, laid back fella" who can be shy, the cat's online bio states: "I do know that I like to open closed doors. When I see one it challenges me, and I work hard to get it open and I’m usually successful."

Quilty, a 6-year-old domestic short-haired cat, was freeing other cats from a room at the Friends for Life shelter in Houston, Texas, several times a day before he was banished to the lobby. (Friends for Life)

The domestic short-haired cat's actions resulted in his banishment from the cat room to the lobby, where he took a "brief hiatus."

"His roommates missed him while he was banished to the lobby. They enjoyed their nighttime escapades around the shelter," the group wrote online. "The staff, however, did not miss the morning cat wrangling, so we’ll just have to agree to disagree there."

Before he was allowed back in the room, Quilty had to enter the "integration kennel" to get readjusted. "He is being a spicy a-hole now because he is, once again, contained," the shelter wrote.

Soon after, Quilty apparently also released himself from the integration kennel inside the room, which the rescue joked was the cat releasing "himself of his own recognizance."

Rescuers said this isn't Quilty's first time around the opening-doors-block, as he "he used to let his dog sibling in the house at his old home," according to Friends for Life.

Because of his bizarre, funny antics, Quilty has amassed a large social media following of more than 30,000 fans on his personal Instagram, titled "Free Quilty." His profile describes him as a "door ninja" with an "advanced degree in Catculus."

But as of Tuesday, Quilty was on a "sleepover," or a one-week trial at a potential adopter's home, where two dogs live. The potential cat parent to Quilty said the 6-year-old is "doing really well" and "is the most loving and affectionate cat I have ever met!"

Looks like Quilty might have a new home — where he can once again open up doors to free his animal siblings.