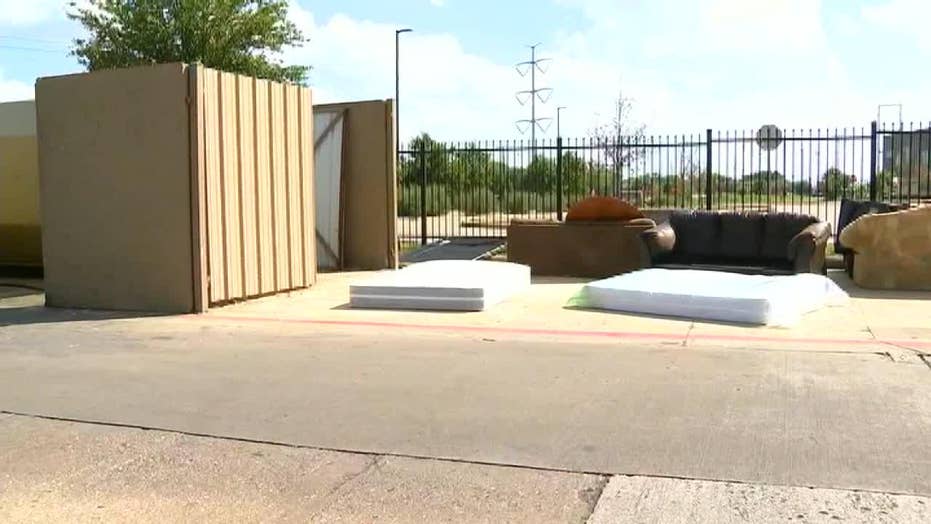 Arlington police are still investigating to find out who left the newborn.

A "beautiful baby boy" was found inside a suitcase near a dumpster in Texas on Saturday — and police have released images of the bag in the hope someone will recognize it, providing information to help them find the child's mother.

The baby, nicknamed "Baby Jason," was discovered in an Arlington apartment complex on Saturday morning. Local police responded to the "terrible call" and transported the hours-old baby to a hospital.

On Tuesday, the Arlington Police Department posted photos of the suitcase and other items on social media, hoping "someone will recognize these items and come forward." The suitcase is small and black, and has a purple stain on the upper front pocket with a combination lock on the handle. The words "Chong Ping" are inscribed on it and its interior is a tan or yellow print.

The baby was wrapped in a leopard print blanket alongside a red-pink paisley scarf.

Det. Morgan Speer told KDFW the items are "still being processed by our crime scene" and said blood was discovered inside the suitcase. Speer said investigators are "attempting to see if they can pull some fingerprints or things like that out of it too.”

The baby was born just hours prior to being found, and was four- to six-weeks premature, the news outlet reported. The umbilical cord was still attached and the boy was cold and suffering from low oxygen levels.

An hours-old baby was found in this suitcase outside an Arlington, Texas, apartment complex dumpster on Saturday morning, officials said. (Arlington Police Department)

The woman who heard the child's cries "opened the suitcase at which time she saw a beautiful baby boy who is responsive and alive,” Speer said.

The detective added that typically, the maintenance staff at the Arlington apartment complex puts "everything in the trash compactor in the morning and compact it." But on Saturday morning, the man in charge of that was late for work, "and so that didn't happen."

"Once again, talking about how blessed the baby was," she said.

Authorities are looking for the mother of the child, who could have dropped off the baby at a hospital, EMS or fire department without a ramifications, according to Texas state "Safe Haven" laws.

Anyone with information on the baby or his mother is urged to contact Tarrant County Crime Stoppers at 817-469-8477.