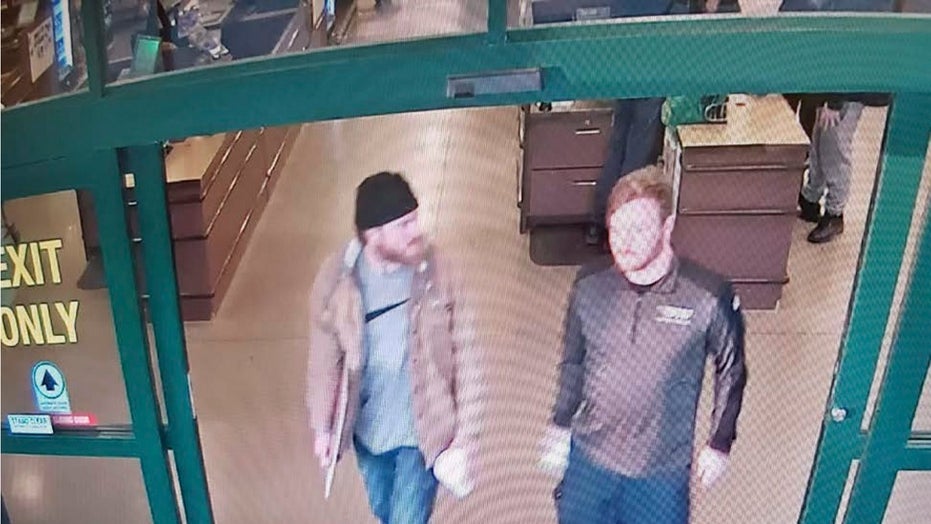 Brian Lemley, 33; Patrik Mathews, 27; and William Bilbrough, 19, have been charged with a variety of weapons charges as well as harboring an alien.

Federal authorities believe the three men are members of a white supremacist group called “The Base,” a collective of neo-Nazis that operates as a paramilitary organization. Law enforcement officials also think the three were planning to attack the recent pro-gun rally in Richmond, Va.

This image from a Jan. 1, 2020, surveillance video and released in a U.S. attorney detention memorandum, shows Brian Mark Lemley Jr, right, and Patrik Mathews leaving a store in Delaware where they purchased ammunition and paper shooting targets. The pair, along with William Garfield Bilbrough IV, plotted to carry out “essentially a paramilitary strike” at a Virginia gun rights rally, a federal prosecutor said Wednesday. (U.S. Attorney via AP)

Mathews was a combat engineer for the Canadian Army Reserve while Lemley served as a scout in the U.S. Army. Mathews allegedly crossed into the U.S. from Canada illegally in August and was picked up in Michigan by Lemley and Bilbrough.

Lawyers for Bilbrough, from Maryland’s eastern shore, called him “a knucklehead, but not a terrorist.”

However, prosecutors showed Sullivan several pictures from Bilbrough’s phone where he was preparing to slaughter a goat in what they called “a ritual” while holding his hand up in what looked like a Nazi salute. They described him as a pizza delivery driver who lives with his grandmother in Denton, Md., and as a leader of the group who was seen as a “prophet” by Mathews and Lemley.

Prosecutors also showed the court a picture they said was from Bilbrough’s phone of Robert Bowers, the suspect in Pittsburgh’s Tree of Life Synagogue massacre. Under Bower’s picture was the word “Hero.”

Patrik Mathews, a former Canadian Armed Forces reservist, and two other men who are linked to a violent white supremacist group were believed to be heading to a pro-gun rally in Virginia's capital earlier this week. A federal judge in Maryland ruled Wednesday. that Mathews will remain in custody pending a Jan. 30 preliminary hearing. (Royal Canadian Mounted Police via AP)

In the end, Sullivan called it a “close call” and admitted that he came into the hearing thinking Bilbrough was only a pawn in this situation. However, he said prosecutors convinced him that Bilbrough thought of himself as a leader and poses a legitimate threat to society and a flight risk.

The judge reminded Bilbrough’s defense lawyer, Robert Bonsib, that [Charleston massacre shooter] “Dylann Roof was only 20 or 21, the Sandy Hook shooter was 20. Anybody can pull the trigger.”

Mathews' attorney, Joseph Balter, said his client's conversations captured at a Delaware home in the days leading up to the rally are protected by the First Amendment.

“One man's domestic terrorist can be another man's exercise of his First Amendment rights,” Balter said.

Luke Austin Lane of Floyd County, Jacob Kaderli of Dacula, and Michael Helterbrand of Dalton, Ga. FBI spokesman Kevin Rowson said Friday that agents assisted in the arrests of the three Georgia men linked to The Base, a violent white supremacist group, on charges of conspiracy to commit murder and participating in a criminal street gang. (Floyd County Police via AP)

Federal prosecutors argued Mathews wasn't arrested for violating the First Amendment. They said the men had prepped for civil war when they packed food and other supplies they intended to use during and after the rally.

The trio was arrested last week as part of a broader investigation into The Base. Authorities in Georgia and Wisconsin also took four suspected Base members into custody. Three of the suspected members -- Luke Austin Lane, 21; Michael Helterbrand, 25; and 19-year-old Jacob Kaderli -- allegedly plotted to murder a married couple involved in the Antifa movement.

A preliminary hearing for Bilbrough has been set for January 30.