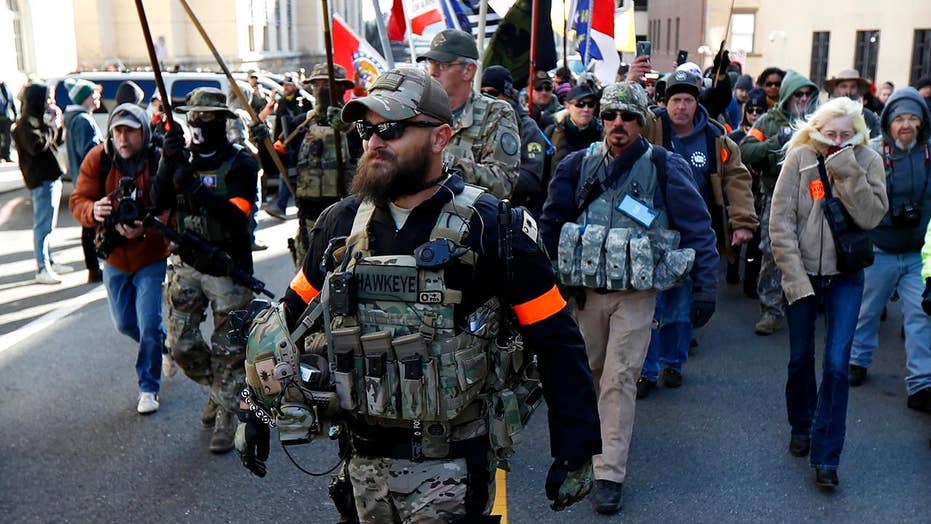 Massive crowds of Second Amendment supporters descended upon Virginia's Capitol in Richmond, demanding state Democrats drop a push for comprehensive gun control. This is what they had to say.

RICHMOND, Va. — A gun-rights rally in Richmond that brought thousands of people from across the country to protest a push by Virginia Democrats for comprehensive gun control ended peacefully without any major incidents.

Threats of violence had escalated in the days leading up to Monday's demonstration following reports that white supremacists, armed militia and other extremist groups were planning to attend.

Gov. Ralph Northam, a Democrat, had declared a state of emergency late last week and beefed up security around the Capitol.

"Thousands of people came to Richmond to make their voices heard," he said in a statement Monday evening. "Today showed that when people disagree, they can do so peacefully. The issues before us evoke strong emotions, and progress is often difficult. I will continue to listen to the voices of Virginians, and I will continue to do everything in my power to keep our commonwealth safe."

The Joint Information Center, made up of representatives from the Capitol, Richmond and Virginia State Police, estimated 6,000 people were allowed into a fenced-in area of Capitol Square.

They estimated another 16,000 were outside the gates, though event organizers said many more had turned out. Many of those outside the barrier carried long firearms and wore bright orange stickers that read "Guns Save Lives."

Capitol Police said a 21-year-old woman had been arrested and charged with one felony count of wearing a mask in public. Law enforcement said they warned the woman twice to remove a bandana covering her face but she had refused.

Monday's event brought people from every corner of the country to stand next to Second Amendment supporters.

Demonstrators are seen during a pro-gun rally, Monday in Richmond, Va. (AP)

The throngs who gathered in Richmond Monday were heard in large groups reciting the Second Amendment in unison, while others broke out in chants of "we will not comply!"

When one speaker asked the crowd if they were ready for gun control, the crowd yelled back, ”No!”

Other speakers, including Republican Delegate John McGuire III, used the event to drum up support for President Trump, who tweeted earlier this morning that the "Democrat Party in the Great Commonwealth of Virginia are working hard to take away your 2nd Amendment rights."

“Let me hear if you’re sick and tired of Republicans who do not support President Trump," McGuire said, revving up those in attendance.

Virginia State troopers stand near a security checkpoint at the Capitol grounds in Richmond. (AP)

The president of the Virginia Citizens Defense League – the nonprofit organizer of the rally – told Fox News that it wasn't the pro-gun groups who had been stoking fear of potential violence at the event.

"It's the Democrats," Philip Van Cleave said. "It's almost like they want something to happen. It sounds crazy, but they keep doing it and you have to start wondering if that's intentional."

Stacks of chain-link fencing, white tents and rows of metal detectors were in place early Monday morning as some demonstrators began making their way inside the Capitol grounds. But many instead decided to stand outside the security perimeter with their guns.

Others were seen carrying American and Gadsden flags, while some were passing around petitions demanding the ouster of Gov. Ralph Northam, the state’s Democrat leader.

VIRGINIA BRACES FOR RALLY AS WORRIES OVER VIOLENCE, HATE GROUPS AND MILITIAS GROW

Members associated with the Light Foot Militia, some of whom were banned from Charlottesville, Va., following the deadly 2017 "Unite the Right" rally, were expected to attend Monday's protest. Richard Spencer, a prominent white nationalist, has indicated he might make an appearance.

Stephen Willeford saved countless lives when he chased off the Sutherland Springs shooter after he ambushed Texas churchgoers.

The bills that sailed through the Senate Judiciary Committee propose to require background checks on all firearms purchases; allow law enforcement to temporarily remove guns from people deemed to be a risk to themselves or others; limit handgun purchases to one a month; and let localities decide on whether to ban weapons from certain events. To become law, the bills would have to pass the full Senate and the House of Delegates before going to the governor for his signature.

Demonstrators stand outside a security zone before a pro-gun rally in Richmond, Va.

In a symbolic sign of defiance, more than 100 municipalities in Virginia have designated themselves as a safe haven or sanctuary for the Second Amendment. Lawmakers and authorities in those areas have said they will refuse to enforce new gun control laws the Virginia Legislature passes.

The state’s only self-proclaimed socialist Democrat, Lee Carter, has said he will be heading to an “undisclosed location” to work Monday instead of the Capitol.

“People were threatening to murder me and murder my family over something I’m not even doing,” Carter told multiple media outlets. “These threats are more hateful and more numerous than anything I’ve seen before. I mean, I’m the only socialist elected to a legislature in the South, so I do occasionally get waves of death threats -- about every two three months it’ll happen -- but this one is far larger and far more serious than anything I’ve seen before by orders of magnitude.”

Carter said he has reported the threats to the Virginia Capitol Police.

But some demonstrators in Richmond tell Fox News he should make an appearance.

"I think it's ridiculous a former Marine would stay at home,” said Angela Darton of Fairfax County. “If he's so anti-Second Amendment, you'd think he'd make an effort to be here."

Monday's rally was part of Lobby Day, an annual event in Virginia where advocates of a variety of causes descend on Richmond's Capitol Square to plead their cases to legislators. Gun rights advocates have shown up in past years but the turnout Monday has grown astronomically.

The rally Monday also came about two and a half years after a deadly incident in Charlottesville, in which hundreds of white nationalists and their supporters gathered about 70 miles from Richmond to demonstrate over plans to remove a Confederate statue. They were met by counterprotesters and violence quickly erupted. At one point, a vehicle drove into a crowd of counterprotesters, killing one and injuring more than a dozen others.