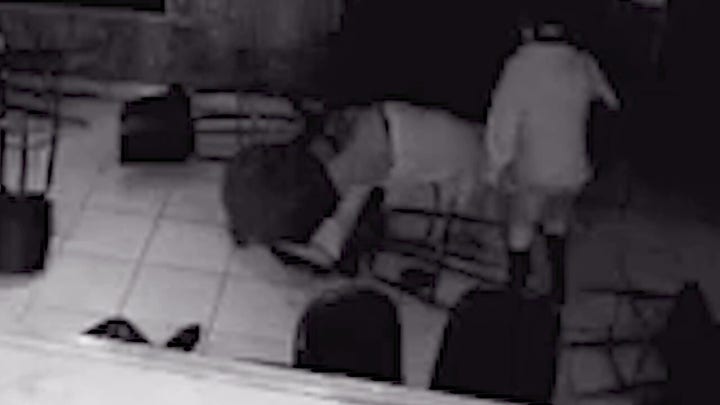 Surveillance video released by authorities appears to show a man attacking his girlfriend, holding a gun to a bartender's head and then firing six rounds inside a Florida bar before he was tackled by customers Sunday.

Flagler County Sheriff's Office previously said it all happened because the suspect was upset he could not find the keys to his truck.

Connor Anderson left the bar before returning with a firearm, putting the woman into a headlock and holding the gun to her head, deputies said. They responded to Smiles Nite Club in Palm Coast after receiving 911 calls that someone had fired a gun inside the venue.

Anderson was found in a nearby parking lot still armed with a 9mm Glock handgun. He was taken into custody without incident and arrested.

A still frame from surveillance video shows a crowd around a man who opened fire in a Florida bar.  (Flagler County Sheriff's Office)

No injuries were reported during the incident.

Anderson was booked into jail on several charges, including shooting into a building, simple battery, aggravated assault, using a firearm while under the influence of alcohol and improper exhibition of dangerous weapons or firearms. His bond is set at $542,000.

"It is amazing this dirtbag did not kill or seriously injure anyone during his moment of rage over something as small as his car keys," Sheriff Rick Staly said. "Violence is never the answer and alcohol and guns never mix well."

Staly commended the patrons who intervened, saying that "putting themselves in danger in this case saved many lives."