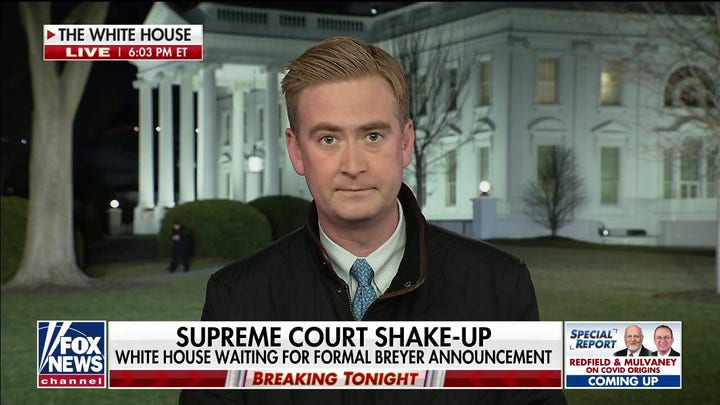 A source close to Breyer told Fox News that the justice will step down at the end of the current Supreme Court term early this summer.

Liberal activists were calling for the 83-year-old justice to retire soon after Biden was inaugurated. Sources close to Breyer, however, said the justice made the decision on his own terms and was not forced out.

Breyer was appointed by former President Bill Clinton, a Democrat. Breyer's replacement will need to be confirmed by the Senate, which is currently split 50-50 between Democrats and Republicans, with Democrats technically holding the majority because Vice President Harris can break ties.

White House Press Secretary Jen Psaki said Wednesday that the White House won't be commenting, at least for now, about Breyer stepping down. CLICK HERE FOR MORE ON OUR TOP STORY.

In other developments:
- Biden promised Rep. Clyburn to nominate Black woman to SCOTUS
- CNN, MSNBC tout Supreme Court vacancy as political opportunity for Biden: 'This could be a real jolt'
- Breyer's retirement from Supreme Court prompts 'Squad' to call for Black woman nominee: Biden, 'you promised'
- Supreme Court math: The Senate formulas for confirming or sinking Stephen Breyer's successor
- Breyer was relentlessly bullied by the left to get out before Republicans seize the Senate

US hands Russia written response to demands, says up to Kremlin how to proceed
Secretary of State Antony Blinken announced Wednesday that the United States has delivered written responses to demands made by Russia, saying it will be up to the Kremlin on how they want to proceed amid heightening tensions between Moscow and Ukraine.

Russia had issued a list of demands in December, including a promise to not admit Ukraine as a member of NATO and to withdraw troops from the region even as Russia continued to amass troops near the Ukraine border, increasing fears that Moscow will order an invasion of its neighbor.

Blinken, on Wednesday, said that U.S. Ambassador to the Russian Federation John Sullivan hand-delivered the Biden administration's written responses to the Russian Ministry of Foreign Affairs in Moscow.

Blinken said the administration is not releasing the document publicly because "we think that diplomacy has the best chance to succeed if we provide space for confidential talks."

"All told, it sets out a serious diplomatic path forward should Russia choose it," Blinken said Wednesday, including a "principled, pragmatic evaluation" of the concerns that Russia has raised.

Blinken said the document makes "clear" that there are "core principles" the United States is committed to defending, "including Ukraine's sovereignty and territorial integrity and the right of states to choose their own security arrangements and alliances." CLICK HERE FOR MORE.

In other developments:
- Russia threatens 'appropriate measures' if West's responses to demands aren't constructive
- Reporter’s Notebook: Russia-Ukraine tensions escalate, and Congress may weigh in
- Six US fighter jets arrive in Estonia amid Ukraine-Russia tensions
- Tomi Lahren: Why is defending Ukraine's border the priority over securing our own?

San Francisco DA Chesa Boudin sued for turning back on Asian attack victim as anti-AAPI hate crimes soar 567%
An Asian-American man who was violently attacked in 2019 is suing San Francisco District Attorney Chesa Boudin, accusing the prosecutor of mishandling the case against his assailants – who beat him with a baseball bat, threatened him with a glass bottle and told him: "I’m going to kill you," court papers show.

Anh Lê’s lawsuit against Boudin was filed just one day before the San Francisco Police Department announced an astonishing 567% increase in hate crimes against Asian-American and Pacific Islander (AAPI) individuals.

The now-69-year-old victim slammed the liberal district attorney for refusing "to uphold the fundamental rights of Asian American victims of racially-motivated violence," and in turn failing to "recognize their humanity," the lawsuit states.

"In this case, as disturbing as the attack on Mr. Lê is, equally disturbing is his mistreatment by the DA’s office in the aftermath of his violent attack by the Tanner family," the complaint charges, referring to the suspect in the case. The 111-page suit was filed Monday in the Northern District of California.

"I am a survivor of a horrendous attack that took place in San Francisco with no consequences to the attackers," Lê said during a news conference announcing the suit. He said suspect Jimmy Tanner, whom he described as being 250 pounds, was arrested for felony terroristic threat, felony elder abuse and battery – but ultimately got off with a misdemeanor. CLICK HERE FOR MORE. 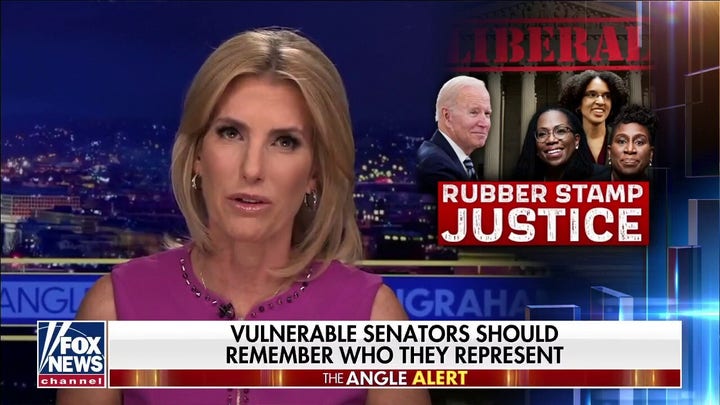 Laura Ingraham said on Wednesday’s "The Ingraham Angle" if moderate Democrats like Sen. Joe Manchin, D-W.Va., vote for a hard-left Supreme Court nominee, their political careers would effectively be ended — as they "should" be.

"Now, as a man who has some semblance of common sense, Joe Manchin should never go along with Biden's court charade. Now, what are the odds that the state of West Virginia would ever win a case in front of a hard-left court? Voting for one of these picks would end Manchin's political career in West Virginia … a state that is in an open rebellion now against Biden's policies," the Fox News host said.

This edition of Fox News First was compiled by Fox News' Jack Durschlag. Thank you for making us your first choice in the morning! We’ll see you in your inbox first thing Friday.