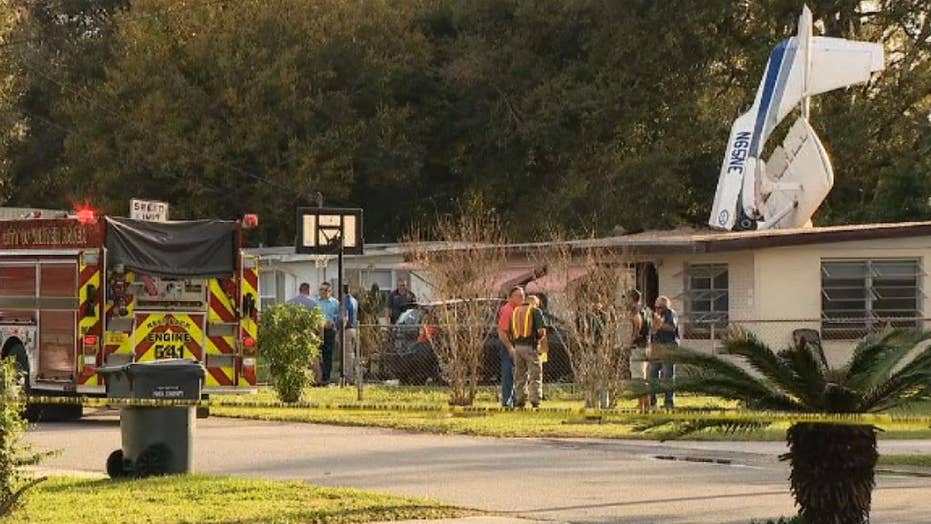 One person was killed and two others were injured after a small plane crashed into a home in Central Florida on Saturday, officials said.

The crash happened around 12:45 p.m. just south of the Winter Haven Airport in Winter Haven.

Polk County Sheriff Grady Judd told FOX13 that 64-year-old instructor pilot James Wagner of Lakeland and 33-year-old student pilot Timothy Sheehy of Bozeman, Mont., were on board when the plane took off from the Winter Haven Airport. The two were scheduled to perform simulated engine failure training when the plane crashed.

"As tragic as this was for Mr. Wagner, it was a blessing today that we didn't have an entire family wiped out," Judd said Saturday. "It is an unbelievable set of circumstances. We certainly expected to find the worst."

Three people were inside the home at the time the plane crashed. Three children, ages 2, 11 and 15, were playing in the front yard when the aircraft came down, according to FOX13.

Carmelle Ngalamulume, 17, was in one of the bedrooms and became pinned under the wreckage after the crash, according to Judd.

Three people were inside the home at the one, but only one was injured. (FOX13)

"We're shocked at how minor her injuries are," the sheriff said.

Judd said Carmelle's brother, 20-year-old Joel, was in an adjoining room and tried to free his sister. The children’s mother was taking a shower when the plane went down into the home. The teenage girl was transported to the hospital after she was freed.

Wagner's family said the pilot had more than 30 years of experience.

“He just had the kindest heart and he was patient and loving and he wasn’t judgmental," Wagner's son-in-law, Luis Nunez, told FOX13. "And he would help anybody. Just anyone who needed help or an ear to listen to, he was there.”

The FAA and the Polk County Sheriff's Office are investigating the crash, and representatives from the National Transportation Safety Board are expected to visit the crash scene on Sunday as part of the investigation.