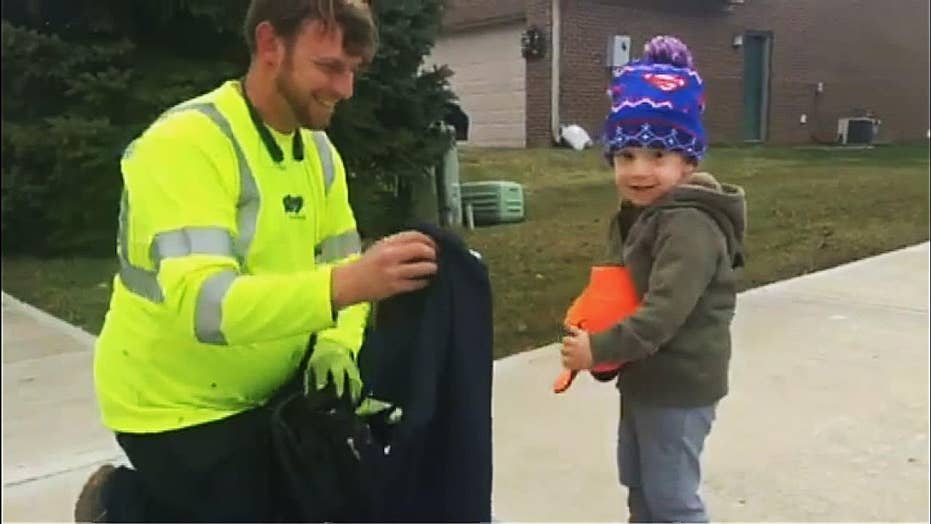 A two-year-old boy was ecstatic when he saw his favorite sanitation worker had come to pick up trash from his Indiana home but was not expecting what happened next.

Evan Brenneman, two, of Plainfield, Ind., woke up at 3 a.m. on Thursday to greet James Bullock of Ray’s Trash Service, his favorite trash man. However, Bullock was prepared for his young fan and presented him with a backpack full of goodies.

Evan was presented with a hat, shirt, stickers, backpack, cup and miniature trash can. The little boy took a liking to the trash can.

Bullock and Evan started their friendship when the worker asked if the young boy wanted to see his truck. He even attended Evan’s birthday party.

The young boy has Prader-Willi Syndrome, a rare genetic disorder, according to the Indianapolis Star. The Mayo Clinic said a “key feature” of the syndrome is “a constant sense of hunger that usually begins at about two years of age.” Ray’s Trash Service has sponsored the boy at walks to raise awareness of the syndrome.

Evan’s mother, Natalie Brenneman, told the Indianapolis Star that watching her son’s friendship with Bullock grow has been magical.

"Oh my gosh, my heart bursts every time," she said. "I know he’s in the middle of his work day and probably wants to get it done quickly, but he stops and talks to Evan. He always gets down on his level, looks him in the eye, gives him a hug, offers him a high-five. It’s just so great that he pauses to talk with us and to spend a little time with Evan.”