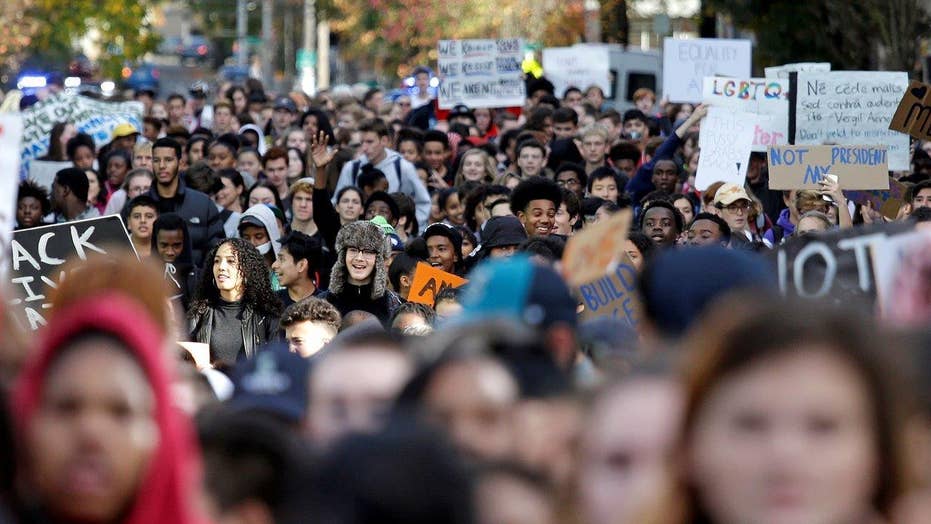 Geraldo sounds off to Tucker Carlson on the report that more than half of anti-Trump protesters arrested in Portland didn't even vote, plus college campus hysteria over 'The Donald' election victory #Tucker

San Francisco's public schools have been offered a classroom lesson plan that calls President-elect Donald Trump a racist, sexist man who became president "by pandering to a huge racist and sexist base."

'SUCK IT UP': LAWMAKER WANTS TO CUT FUNDING FOR SCHOOLS CODDLING STUDENTS OVER TRUMP

The union that represents city teachers posted the plan on its website and distributed it via an email newsletter to its more than 6,000 members. The school district has more than 57,000 students.

The Republican Party in San Francisco slammed the lesson plan.

"It's inappropriate on every level," said Harmeet Dhillon, an RNC committeewoman from California. She called it "inappropriate propaganda that unfairly demonizes not only the campaign that Donald Trump, the winner, ran, but also all of the people who voted for him."

The plan was written by social studies teacher Fakhra Shah, who said she hadn't planned for it to spread citywide — that was a step taken by the teacher's union. She wrote it at 2 a.m. Nov. 9, just hours after results came in, to help teachers at her school struggling with how to answer students' questions and concerns about Trump becoming president.

City education officials have signaled support for the lesson plan, claiming it's entirely optional for teachers to use -- not part of the official curriculum.

"Educators are entrusted to create lessons that reflect the California standards, support students' social and emotional well-being and foster inclusive and safe school communities," school district spokeswoman Gentle Blythe said in a statement that neither praised nor rebuked the lesson plan. San Francisco schools serve diverse populations and teachers are encouraged to include multiple perspectives in lessons, she added.

"I think a lot of people were lost for words, wondering, 'What do we say? What do we do?'" said Shah, whose Latino, African American, white, Muslim and LGBTQ students are worried about a surge in hate crimes since the election.

"We're calling him out," she said. "If he's our president, I have the right to hold him accountable and ask him to take a stance that is anti-hate and anti-racist."

The plan encourages teachers to let students express their concerns and to offer them hope and tell students that they can keep fighting. "We can uplift ourselves (and) fight oppression here at school even if we cannot control the rest of the country," she said.

San Francisco is diverse, with many students whose families are in the country illegally and who say they're worried by Trump's calls for deportation. Shah warned teachers that some students may use inappropriate words to express their fear and anger.

"I know that they might curse and swear, but you would too if you have suffered under the constructs of white supremacy or experienced sexism, or any isms or lack of privilege," she wrote.

About 2,000 San Francisco students walked out of class last week to protest the new president. On Monday, Mayor Ed Lee declared that San Francisco would continue to provide sanctuary for all immigrants, religious minorities and gays and lesbians.

The union that represents teachers, the United Educators of San Francisco, defended the plan.

"There is a time and a place for using words that match action," Blanc said. She praised the plan's advice for students — "to stand up and defend themselves, and speak out for themselves and make a difference."