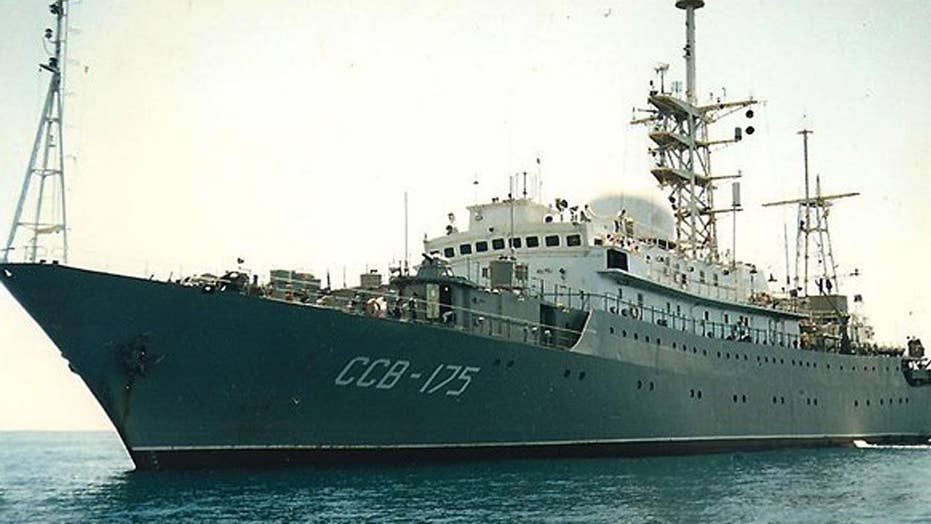 The Russian spy ship Viktor Leonov is currently “loitering” off the coast of Norfolk, Va., home to the largest naval base in the world, two U.S. officials tell Fox News.

As of Friday morning, the Russian spy ship is slowly patrolling only 17 nautical miles -- roughly 19 miles -- from land, according to officials. United States territorial waters extend 12 nautical miles from shore.

Fox News was first to report the sighting of the Russian spy ship off the coast of Delaware on Tuesday.

The Victor Leonov, armed with an array of intelligence gathering equipment used to intercept communications and analyze U.S. Navy sonar capability, later traveled within 30 miles off the Connecticut coast near a submarine base earlier this week.

“It’s lawful [and] similar to operations we do around the world,” Pentagon spokesman Capt. Jeff Davis told reporters Friday.

Defense Secretary Jim Mattis, speaking in Germany on Friday, alluded to Russia without saying the name. "We can no longer deny reality. As guardians for our nations and as sentinels for new threats, we all see our community of nations under threat on multiple fronts, as the arc of instability builds on NATO's periphery and beyond."

The Russian spy ship left her homeport in the Barents Sea near Norway, part of Russia’s northern fleet, around New Year’s Day, according to American defense officials. Following a port call in Jamaica, the Russian ship then began its voyage north along the east coast of the United States.

The deployment of the Russian intelligence-gathering ship was likely planned for months before it set sail in early January, according to U.S. defense officials. They said it apparently was not tied to the Obama administration’s Dec. 29 order that Moscow shut down two of its “vacation” properties, which the U.S. government said were used to intercept American communications. One was on New York's Long Island and the other was at Maryland’s Eastern Shore.

It’s the first time the Viktor Leonov has appeared off the east coast of the United States since April 2015. The ship was spotted in Havana Harbor in January 2015 as the Obama administration eased relations with Cuba. U.S. officials have said they believe the Russian spy ship will eventually make its way back to the Caribbean.

“The greatest thing I could do is shoot that ship that’s 30 miles offshore right out of the water. Everyone is going to say that’s so great. That’s not great. I would love to get along with Russia,” Trump said.

When the president was later asked about other recent Russian provocations including the buzzing of a U.S. Navy destroyer in the Black Sea roughly 180 miles southwest of Russian held Crimea, Trump responded, "Not good."

The four Russian jets came within 200 yards of the USS Porter and had their identifying transponders turned off according to a spokesman for the U.S. military’s European Command.

Around 500 U.S. Army soldiers and tanks have poured into Romania from the Black Sea this week. In Brussels Thursday, Mattis was asked by Fox News' Jennifer Griffin if he trusted the Russians enough to potentially work with them in the future.

“Russia is going to have to prove itself first,” Mattis answered, adding it was premature to talk about cooperating militarily with Moscow.

Yet roughly 2,600 miles away from Brussels, the Chairman of the Joint Chiefs of Staff, Gen. Joseph Dunford, was meeting his Russian military counterpart, Valeriy Gerasimov, in Azerbaijan pledging to "enhance communications" between respective militaries, according to a Pentagon statement following their meeting.

The Pentagon cut off military-to-military talks with Moscow after Russia’s annexation of Crimea in 2014.

“The United States will consider working with Russia when we can find areas of practical cooperation that will benefit the American people. Where we do not see eye to eye the United States will stand up for the interests and values of America and her allies,” Tillerson said after his meeting with Lavrov.

The Russian foreign minister said U.S. sanctions against Russia were not discussed in his meeting with Tillerson.