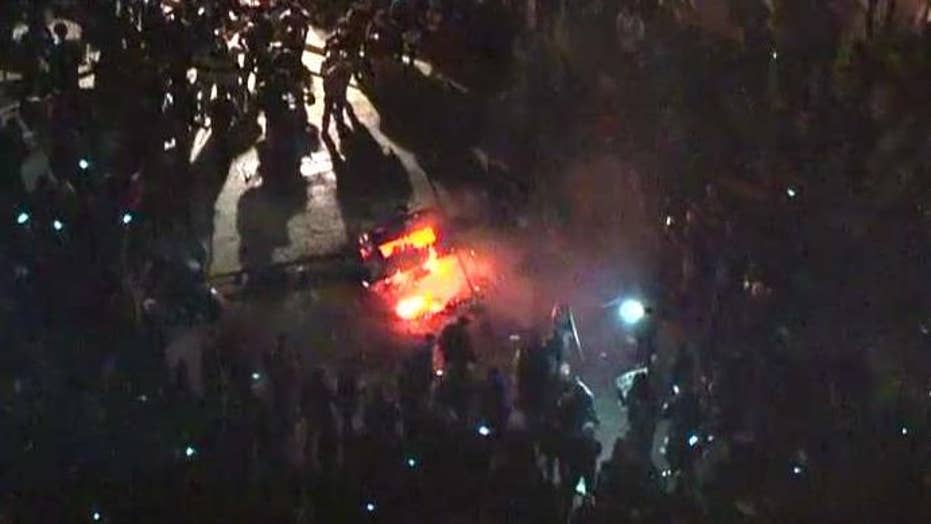 A planned talk at the University of California-Berkeley by polarizing Breitbart News editor Milo Yiannopoulos was canceled Wednesday evening after protesters threw smoke bombs and flares at the student union building where he was scheduled to speak.

"Violent left-wing protesters stormed the building and forced me to be evacuated by police and by my security detail," Yiannopoulos told Fox News' Tucker Carlson in a phone interview from an undisclosed location.

At #miloatcal has been cancelled. Milo has left campus. @UCBerkeley @CalSurvivor

There were no immediate reports of any serious injuries or arrests.

Yiannopoulos, 32, is a vocal supporter of President Donald Trump and a self-proclaimed internet troll whose comments have been criticized as racist, misogynist, anti-Muslim and white supremacist.

The decision to cancel was made two hours before the start of the event because a crowd of more than 1,500 people had gathered outside the venue, the university said in a statement.

"We condemn in the strongest possible terms the violence and unlawful behavior that was on display, and deeply regret that those tactics will now overshadow the efforts to engage in legitimate and lawful protest against the performer's presence and perspectives," the statement read, in part.

Hundreds of peaceful demonstrators carrying signs that read "Hate Speech Is Not Free Speech" had been protesting for hours before the event.

In the evening, a small group dressed in black and in hooded sweatshirts used metal barricades to break windows, threw smoke bombs and flares, used a diesel generator to start a large bonfire outside the building.

"This was a group of agitators who were masked up, throwing rocks, commercial grade fireworks and Molotov cocktails at officers," said UC Berkeley Police Chief Margo Bennet.

The demonstrators were met by tight security in the form of law enforcement armed in riot gear. A shelter in place order was in effect and the Cal campus was placed on lockdown.

"I think tonight is odious and a horrible spectacle and very humiliating for American higher education," Yiannopolous told Carlson, "but I would like to think that it will have a silver lining."

UC Berkeley was to have been Yiannopoulos' last stop on his tour aimed at defying what he calls an epidemic of political correctness on college campuses. The visit had been sponsored by the college's Republican club.

Pieter Sittler, a spokesman for the Berkeley College Republicans, said the club doesn't support everything Yiannopoulos says but "he gives a voice to repressed conservative thought on American college campuses." He uses "levity and humor" that should not be taken literally, Sittler said. The group said its "constitutional right to free speech was silenced by criminals and thugs."

"The event has been cancelled," Yiannopoulos posted on his Facebook page. "I'll let you know more when the facts become clear. One thing we do know for sure: the Left is absolutely terrified of free speech and will do literally anything to shut it down."

A Trump supporter giving an interview outside the cancelled event was pepper sprayed by someone in the crowd. A video of the incident circulated on Twitter Wednesday night.

Yiannopoulos also posted on Facebook saying, “Don't give up. They cannot win. They will not win.”

#miloatcal protestors are heading back to campus via Center street. If on campus, stay indoors and away from windows

The UC Berkeley Police posted on Twitter to tell people to “stay indoors and away from windows” if on campus.

University officials had previously rejected calls to cancel the event, while stressing that it did not invite Yiannopoulos and does not endorse his ideas.

Yiannopoulos' talks have sparked protests, shouting matches and occasional violence at stops around the country. A man was shot and wounded at protests outside his Jan. 21 talk at the University of Washington.

Rowdy protests at UC Davis Jan. 13 prompted campus Republicans to cancel his appearance at the last minute. His final stop was supposed to be UCLA on Thursday but the invitation was rescinded.