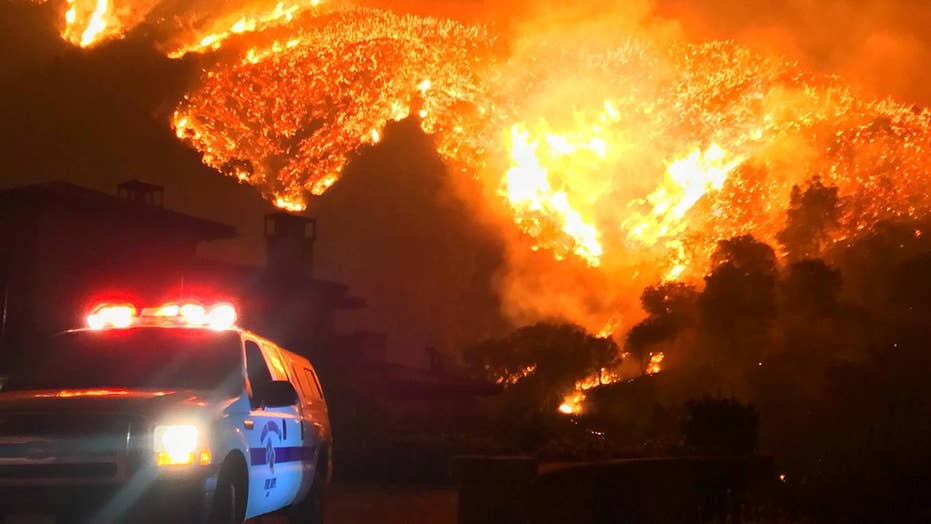 Strong winds drove one of the biggest wildfires in California's history toward Santa Barbara and the nearby wealthy enclave of Montecito Saturday, prompting residents to flee as authorities issued new evacuation orders.

The 404-square-mile Thomas Fire was moving rapidly westward and crested Montecito Peak, just north of Montecito. Known for its star power, the enclave boasts the mansions of Oprah Winfrey, Ellen DeGeneres and many other celebrities.

"It is right above the homes," fire spokesman Jude Olivas told the Associated Press.

Mandatory evacuations around Montecito and neighboring Summerland came as winds that had eased a day earlier roared back at around 30 mph, with gusts to about 60 mph. Firefighters stood by yellow fire trucks with hoses unspooled, ready to protect the historic San Ysidro Ranch as heavy smoke rose from the coastal hills, blotting out the blue skies.

Will Carr reports from Los Angeles.

A portion of Santa Barbara also was under mandatory evacuation. The city's zoo was under voluntary evacuation, and workers there began putting some animals into crates and kennels as a precaution.

In downtown Santa Barbara, Maya Schoop-Rutten, owner of Chocolate Maya, said she saw through the window of her chocolate shop smoke suddenly appear after strong winds blew through.

"It was absolutely incredible," she said. "There was a huge mushroom of smoke that happened in just a matter of a few minutes."

Restaurants and small stores on normally bustling State Street were shuttered, as they have been on and off for more than 10 days as the varying winds pushed the flames and smoke back and forth.

"It's a ghost town. Everything is shut down," Schoop-Rutten said. "It's very, very eerie."

The northbound lanes of U.S. Highway 101, coming up the coast from Los Angeles, were closed for a few hours south of Santa Barbara, with cars stopped on the freeway.

Pierre Henry, owner of the Bree'osh Bakery in Montecito, said he got a text to evacuate Saturday morning as the fire approached homes. He estimated the fire was about a mile away.

"The worst was the smoke," Henry said. "You couldn't breathe at all and it became worse when the wind started. All the ashes and the dust on the street were in the air. It was very, very frightening."

The city, according to Henry, became devoid of people except for firefighters and as many as 50 firefighter trucks.

"We left everything," Henry said. "There is nobody in Montecito. Just firefighters."

Adam Housley reports on the conditions in California.

The morning passed with no homes damaged or destroyed as firefighters dealt with "extreme and erratic" fire behavior, Olivas said.

Schoop-Rutten said the fire is taking an economic toll, even if it doesn't invade the city.

"It's tragic for businesses at this time of the year because this is when we make the money," she said. "Imagine all the restaurants, all the Christmas parties have been cancelled. People lost a ton of revenue in the past few days."

There was a spot of good news down the coast. Emergency officials announced that the same fire that was burning about 25 miles southeast of Montecito was 40 percent contained. Evacuation orders for the city of Ventura were lifted.

As the northerly "sundowner" wind was driving the fire south and west, firefighters were left to hope for them to calm back down.

Adam Housley reports from Carpinteria on the latest efforts to fight the massive fires.

"When the sundowners surface in that area and the fire starts running down slopes, you are not going to stop it," Mark Brown, of the California Department of Forestry and Fire Protection, told a news conference. "And we are not going to stand in front of it and put firefighters in untenable situations."

The fire is now the third-largest in California history. It has burned more than 700 homes and killed a state firefighter.

Cory Iverson, 32, died Thursday from burns and smoke inhalation, according to autopsy results announced Saturday by the Ventura County medical examiner's office. Details of his death were not released.

Since the fire began on Dec. 4, about 95,000 people have been placed under mandatory evacuation. The evacuation zone near Santa Barbara on Saturday was 17 miles long and up to five miles wide and the new expansion encompassed about 3,300 people.

The Santa Barbara Zoo, which is near the mandatory evacuation zone, announced it was putting some animals in crates to prepare for possible evacuation. The zoo has about 150 species of animals, including a pair of Amur leopards, a critically endangered species. Workers began putting vultures, California condors and some smaller animals into crates and kennels in case the fire approached.

"Everything is fine right now. The wind has shifted in our favor," spokesman Dean Noble said. "However, we just don't want to get caught by something unexpected."

Other zoos are ready to accept the evacuated animals, he said. The Fresno zoo has an incubator available for a baby giant anteater, and the San Diego zoo is prepared to accept the Amur leopards and other cats, Noble said.

Everything about the fire has been massive, from the sheer scale of destruction that cremated entire neighborhoods to the legions attacking it: about 8,300 firefighters from nearly a dozen states, aided by 78 bulldozers and 29 helicopters.

The cause remains under investigation. So far, firefighting costs have surpassed $100 million.