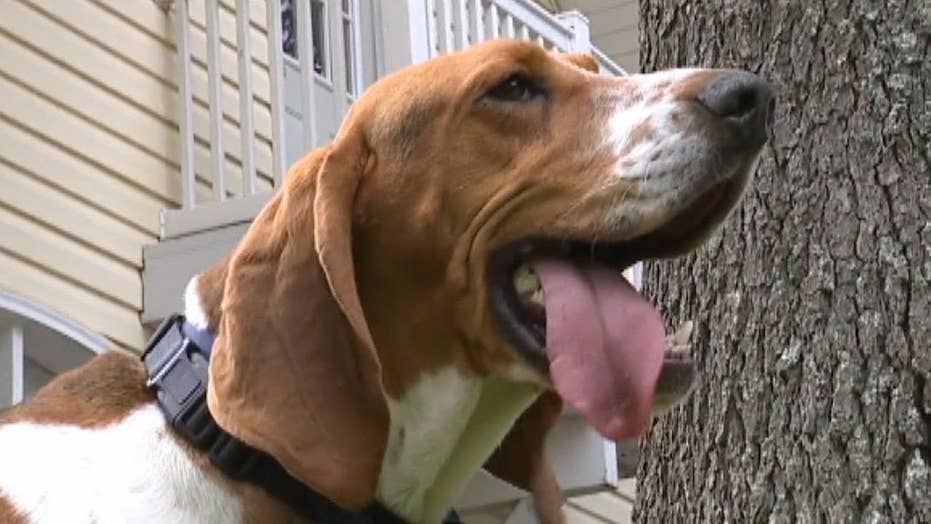 Pennsylvania family says their hound-mix rescue dog Edgar saved their three kids from a possible kidnapping after a man allegedly confessed to breaking into their home looking for a child to abduct.

The Lambert family in Franklin County, Pennsylvania said their rescue dog helped thwart the possible kidnapping of their three daughters last week, when a man, already linked to the kidnapping of a 4-year-old girl, broke into their home April 28.

Thom Lambert told FOX43 he initially knew something was wrong when he noticed his dog acting strangely in the middle of the night.

“It was like a growl howl with that mixed at the same time," he told FOX43. “It was obvious he was really upset and as soon as I got him to quit barking, I heard sounds of someone going down the stairs."

Lambert said he called 911, but didn't find anything. Last Monday, police announced 20-year-old Thomas Dewald was arrested after he took a 4-year-old girl from her bed in the middle of the night on April 25 and bound and stuffed her into a trunk at his grandparents' home before she escaped.

A hound-mix rescue dog named Edgar is being credited by a Pennsylvania family for helping to save their three daughters kids from a possible kidnapping. (FOX43)

Officials said Dewald told troopers he canvassed neighborhoods and looked for unsupervised children who he thought lived in "deplorable conditions" before deciding to take the girl from her home.

After the girl escaped and was discovered by a bystander, police say Dewald admitted to breaking into another home on April 28 -- the Lambert's -- intending to take one of the three children residing there.

“He said that he had been in the house and then our hearts really dropped," Lambert told FOX43.

Police told the homeowner that Dewald came in through a downstairs kitchen and started to walk upstairs -- but he turned around after hearing Edgar's growls.

Edgar, a hound-mix, is credited to helping to scare off a man who admitted to breaking to a family's home looking for a child to abduct. (FOX43)

“Without Edgar, genuinely, who knows where our daughters would be right now," Lambert said. "Our family was one hundred percent rescued by our dog that we rescued."

Lambert said the family is more than grateful for Edgar's heroic howls and hopes others consider getting a rescue dog as their next pet.

"He’s just the biggest goofball ever," Lambert told FOX43. “I was like, of course it would be this huge, like, dumb-dumb, pain in the butt that would save our children's lives."