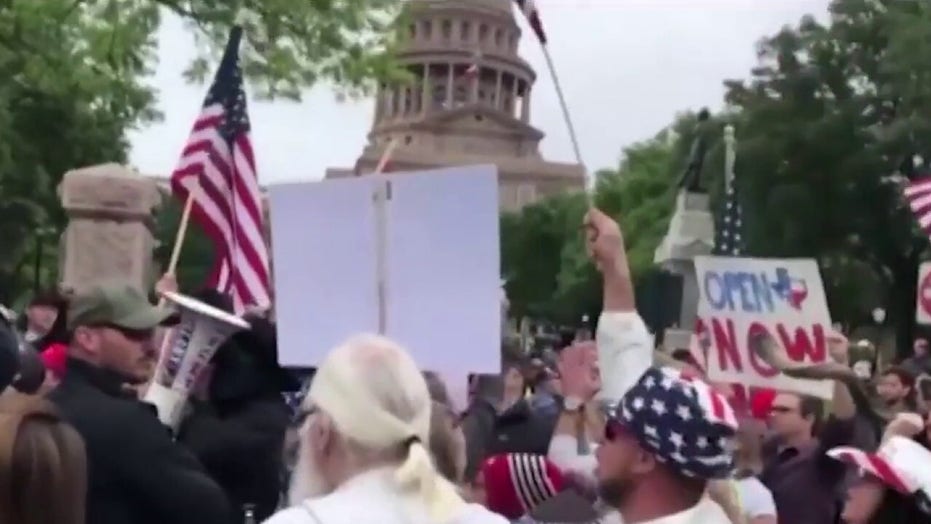 Protesters across the country claim the economic toll is worse than coronavirus; Jonathan Serrie reports.

One of the organizers of a reoccurring protest at the North Carolina state capital opposing Gov. Roy Cooper’s lockdown measures was arrested Tuesday, reports said.

Ashley Smith, 33, of Morgantown, is an administrator of the ReOpen NC Facebook page.

She, along with Lisa Marks Todd, 55, of Raleigh, Wendy Kath Macasieb, 53, of Catawba, was arrested and charged with resisting a public officer and violating the governor’s executive order.

A fourth person, Jonathan Dane Warren II, of Union County, was also arrested and faces a third charge of injury to real property after allegedly damaging a mechanical gate on government grounds.

Smith was arrested after allegedly disobeying police instructions to remain off the sidewalk outside the Governor’s mansion, The Raleigh News & Observer reported.

Capitol Police said the three women and the man violated the executive order by “participating in a mass gathering while failing to maintain appropriate social distancing and refusing to comply when given the opportunity to do so," WTVD in Raleigh reported.

Cellphone video captured by a The News & Observer reporter showed the moments officers – wearing face masks and gloves – ducked a handcuffed and mask-less Smith into a police car.

In a statement, Smith claimed she suffered a wrist injury during the arrest and that officers took away her eyeglasses, preventing her from seeing clearly.

"Not one Capitol Police Officer practiced social distancing during my entire ordeal," Smith claimed. "So much for following the law… Our protests will continue. Our civil disobedience will accelerate. Our faith in the police has diminished. We will open North Carolina."

Before her arrest, Smith spoke through a microphone from the bed of a pickup truck, in what was the third Tuesday calling for an end to the stay-at-home order that’s forced non-essential businesses to shut their doors and has banned public and private gatherings.

Last week, Cooper extended the stay-at-home order initially set to expire on April 30 to at least May 8 before North Carolina will begin gradually reopening the economy.

"We'll all go to church, we'll open our businesses and we'll buy what we want," Smith told the crowd, according to The News & Observer. "We will not go down gently. If you feel the need to stay home, it is your God-given right to do so. But we want to live!"

“Roy Cooper has shown again and again how out of touch he really is. With his illogical declarations of who’s essential and who’s not, he’s effectively destroyed generational family businesses and many good businesses alike. He’s got to go. November’s coming, baby.”

About 350 protesters were gathered at the protest by 11:30 a.m., WTVD estimated from its helicopter over the scene. A smaller group of counterprotesters – dressed in medical scrubs and masks, and spaced at least six feet apart – stood in silence across the street from the Reopen NC demonstrations with their arms crossed, refusing to respond to hecklers.

When asked about the protesters at his news conference Tuesday, Cooper said he understands “that people are eager to ease these restrictions, I know it's frustrating to stay at home so much. A lot of families are hanging by a thread."

“The thing we have to put first and foremost is the public health and safety of North Carolinians,” he continued. “We have to make sure that things are safe. I’m very eager to move into our phases of reopening. We have a way to look at the indicators to tell us how fast we are going to get there. I hope we move through these as quickly as possible.”

North Carolina, as of Wednesday, recorded at least 9,568 confirmed coronavirus cases, with at least 342 deaths, according to the state Department of Health. At least 463 remained hospitalized with severe cases of COVID-19 by Wednesday.

A different Reopen NC organizer, Audrey Whitlock, announced on the group's Facebook page Sunday that she has completed two weeks in quarantine after testing positive for COVID-19. It was unclear if she participated in the rally this Tuesday.