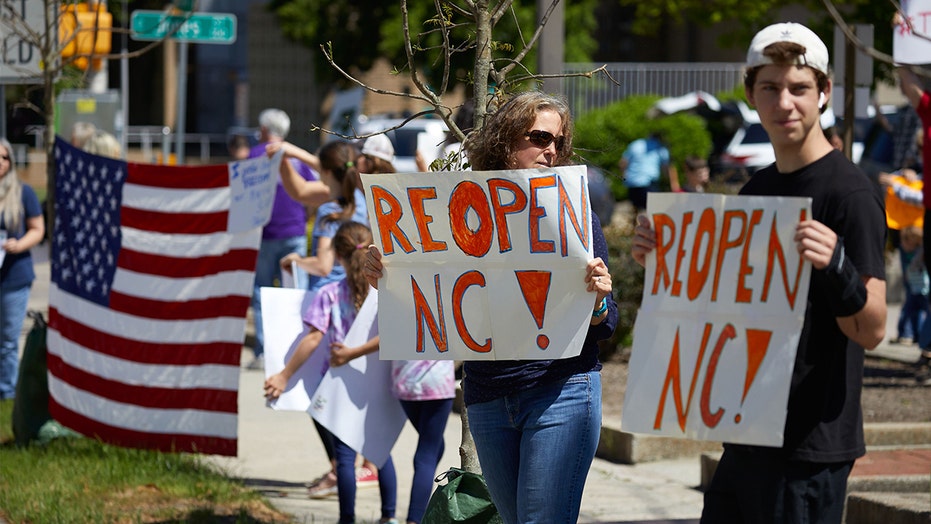 A reoccurring protest at the North Carolina state capital calling on Gov. Roy Cooper to lift lockdown measures is scheduled to happen Tuesday despite its main organizer announcing she had tested positive for the coronavirus, according to reports.

Audrey Whitlock wrote on the Reopen NC Facebook page to announce Sunday marked her last day of a two-week period in quarantine. Describing herself as “an asymptomatic COVID19 positive patient,” Whitlock claimed she has been “forced” to self-isolate and, therefore, was “imprisoned in my home.”

“A typical public health quarantine would occur in a medical facility,” the lengthy post said in part. “I have been told not to participate in public or private accommodations as requested by the government, and therefore denied an amendment right to freedom of religion…"

Protesters from a grassroots organization called REOPEN NC demonstrate against the North Carolina coronavirus lockdown at a parking lot adjacent to the North Carolina State Legislature in Raleigh, North Carolina, on April 14, 2020. - The group was demanding the state economy be opened up no later than April 29. (LOGAN CYRUS/AFP via Getty Images)

“It has been insinuated by others that if I go out, I could be arrested for denying a quarantine order,” she continued. “However, the Americans with Disabilities Act prohibits discrimination by employers, places of accommodation, and state and local government entities… where do we draw the line?”

Whitlock argued that her First, as well as her Fifth and Fourteenth Amendment rights, were violated.

She is one of seven organizers listed on the ReOpen NC Facebook page. The group has vowed to hold rallies in Raleigh outside the Capitol and legislative buildings and the Governor’s Mansion every Tuesday until Cooper lifts a stay-at-home order that has effectively shut down all non-essential business and banned public and private gatherings in the state.

Cooper announced Thursday that the stay-at-home order initially set to expire on April 30 would be extended until at least May 8, before North Carolina can begin gradually reopening the economy.

North Carolina, as of Tuesday, recorded at least 9,142 confirmed coronavirus cases, with at least 306 deaths, according to the state Department of Health. At least 473 people were hospitalized with severe cases of COVID-19 in the state.

After missing the first two Reopen NC rallies, Whitlock is expected to participate in the protest this Tuesday after completing quarantine.

Last week, hundreds of protesters, holding handmade signs with slogans like “My Rights Are Essential” and “ReOpenNC,” marched through downtown Raleigh while chanting “Freedom Now.” Local news broadcasts of the protest showed that most of the people were not wearing masks and were ignoring the Centers for Disease Control and Prevention’s social distancing guidance to keep six feet apart.