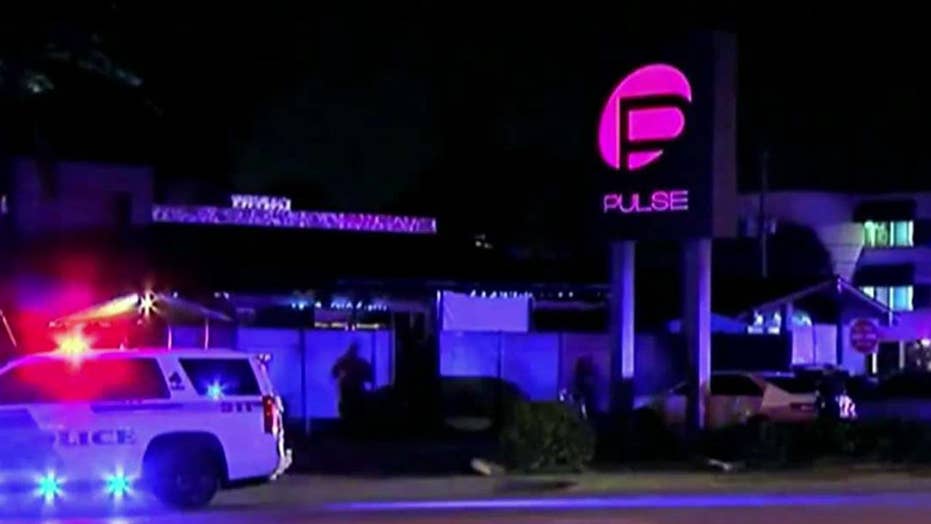 A look back one year after the shooting took place

Family, friends and survivors gathered outside Pulse nightclub in Orlando on Monday, marking one year after 49 people were killed in the deadliest mass shooting in modern U.S. history.

Around 2 a.m., a vigil was held for survivors, local officials and club employees — the same time when gunman Omar Mateen opened fire in the crowded gay club on June 12, 2016. It was the first of three services taking place in the Orlando area. Two other services — one midday and a late-night one at the nightclub — will take place along with a gathering in downtown Orlando.

All U.S. flags in the state will also be flown half-staff, Gov. Rick Scott announced. A giant rainbow flag will be unveiled at the Orange County government building.

THE FALLEN: VICTIMS OF THE ORLANDO NIGHTCLUB MASSACRE

The city of Orlando dubbed the day as "Orlando United Day," encouraging people to act with "love and kindness" during a day marked by a tragic event. The city tweeted out a photo in the morning that named all 49 victims with the caption, "We will always #RememberThe49. #OrlandoUnitedDay." Orlando Police Chief John Mina, in a video, called the night of the massacre "one of the darkest days in [his] 26 years at the Orlando Police Department."

"We will always bear the scars of the Pulse tragedy and grieve for those whose lives were cut short," Mina said. "While painful, those scars are reminders that hate and darkness could not defeat us."

A fundraising "Rainbow Run" took place over the weekend and a businessman donated thousands of dollars to eight gay and lesbian students for their college studies.

Nightclub owner Barbara Poma also announced in April plans to turn the site into a memorial for the victims. She initially declined an offer from the city of orlando to buy the club for $2.25 million to turn it into a memorial. Now people can look through an exhibit of artwork collected from memorial sites set up around Orlando after the massacre at the Orange County History Center.

Mateen walked into the nightclub during "Latin Night" and opened fire, pledging allegiance to the Islamic State during the attack. He killed 49 people and injured dozens of others before he was killed in a shootout with police after a three-hour standoff. Nearly a year after the massacre, police released body camera footage from that night.

Mateen's wife, Noor Salman, is facing charges of aiding and abetting and obstruction in federal court. She has pleaded not guilty to helping her husband.