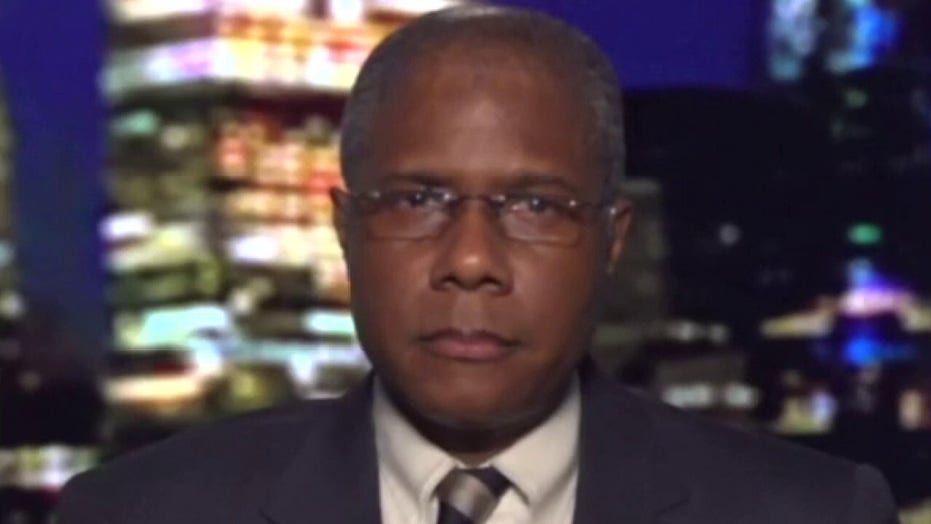 A protest in Denver over the death of George Floyd escalated Thursday evening as demonstrators blocked traffic and vandalized property near the Colorado Statehouse.

Protesters calling for justice for Floyd -- a handcuffed black man who died while in police custody in Minneapolis on Monday -- smashed car windows and broke a window at the statehouse.

Other protests broke out across the U.S., in cities such as Columbus, Ohio, and Louisville, Ky. Further protests were planned for Friday and Saturday in even more cities, including Baltimore, as part of a national movement to expand the protests.

In Denver, protesters marched through the downtown area on Thursday, stopping traffic and briefly blocking cars from entering a freeway, prompting police to fire tear gas to get them to disperse.

Gary Cutler, a spokesman for the Colorado State Patrol, said shots were fired in a park across the street from the Statehouse after most of the protesters had moved downtown.

“We just got shot at,” state Rep. Leslie Herod tweeted. The Statehouse was locked down, Cutler said, and no one was hurt.

“We do believe that the shots were towards the Capitol, but we do not at this point have any correlation to the protest or the protesters,” Denver Police Department spokesman Kurt Barnes told The Denver Post.

Denver Police Department officers clear a man who fell to the street after they used tear gas and rubber bullets to disperse a protest outside the State Capitol over the death of George Floyd, a handcuffed black man who died in police custody in Minneapolis, late May 28, in Denver. (AP Photo/David Zalubowski)

No arrests were reported and it was unclear who fired the shots.

"Tonight is a very sad night for our state," Colorado Gov. Jared Polis tweeted. "While we are still uncovering all of the facts, a protest regarding the killing of George Floyd devolved into vandalism and violence, and I was absolutely shocked by video evidence of a motorist attempting to run over a protestor."

Denver Mayor Michael Hancock tweeted, “I want to plead to everyone, let's demonstrate but let’s demonstrate peacefully. Leave the weapons at home.”

In Columbus, protesters broke windows of the Ohio Statehouse and some went inside, according to reports. According to the Columbus Dispatch, 400 protesters faced off with police at the intersection of Broad and High street.

After the police started launch pepper spray into the crowd to disperse it, protesters moved on to other parts of the city. The protesters started to break store windows and loot and vandalize them.

More police and highwaymen reported to the downtown area around midnight to help put down the rioting.

In Louisville, Ky., hundreds of protesters blocked traffic and seven people were shot, one critically, around 11:30 p.m. while demonstrating against the death of Breonna Taylor, a 26-year-old Louisville woman who was fatally shot by police in her apartment after a “no knock” search warrant on March 13.

Further protests in major cities, including those in New York and across California, also turned violent following police intervention in an attempt to break up the protests before they could turn into riots.

Nine people were arrested in Fontana after an initially peaceful protest of 50 people turned violent. The group swelled to 100 people, with protesters allegedly throwing rocks at storefronts and passing cars as they moved up and down Sierra Ave. When police told protesters to disperse at 9 p.m., the protesters allegedly started hurling rocks at the police, who responded with tear gas.

Thousands of protesters gathered outside the Civic Center on Wednesday night. The protests started peacefully, but protesters attacked California Highway Patrol vehicles after blocking the 101 Freeway. One man was injured when he rode on a cruiser's hood and then fell off, hitting the ground.

"We hear your anger & your pain. We will always facilitate freedom of speech. Period," the LAPD tweeted in response to the escalated violence. "All we ask is that protests are held in a safe & legal manner."

Protesters in New York City on Thursday gathered at Union Square, but when police turned up to disperse the crowd, the protests turned violent. The NYPD told Fox News that protesters spit at the officers, and at least one person attempted to take an officer's gun from its holster.

NYPD officers arrested at least 40 people during the protests and reported that at least four officers were injured and transported to nearby hospitals.