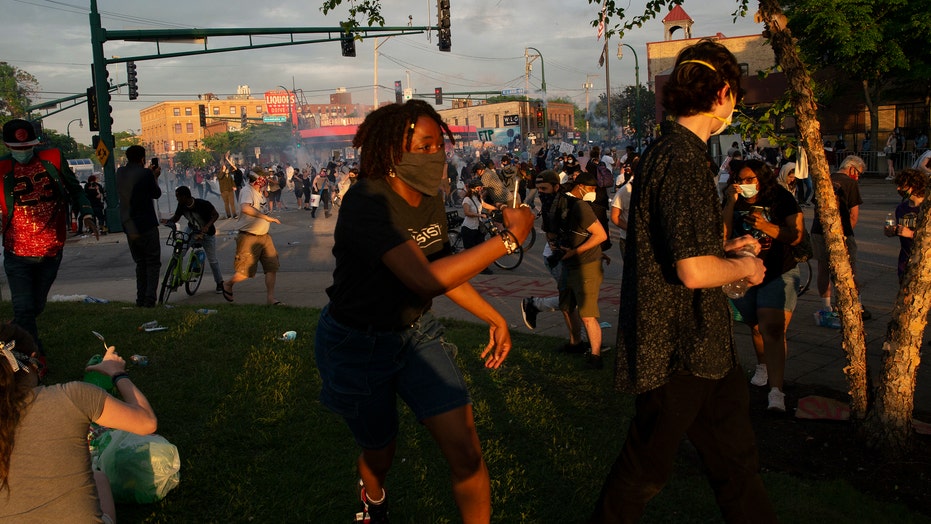 'Outnumbered' reacts to George Floyd's death: 'What is justice?'

Federal and local investigators urged calm in the Twin Cities Thursday as violent demonstrations raged over the death of George Floyd, but did not announce any charges against the officers involved in the case, saying they needed additional time to do their jobs.

Floyd, a black man, died in police custody earlier this week after a white police officer appeared to pin him to the ground with a knee on his neck for several minutes.

"It's imperative that the community understands how seriously we are taking this," U.S. Attorney Erica MacDonald said during a news conference Thursday evening, which had been delayed for two hours as investigators said they were hoping to share an undisclosed update to the case that ultimately did not materialize.

"We thought we would have another development," Macdonald said. "Unfortunately, we don’t at this point."

What investigators did say was that county, state and federal offices were working together on separate investigations into Floyd's death.

Hennepin County Attorney Mike Freeman, who also spoke at the news conference, noticed that his office already had prosecuted and convicted a police officer for "unreasonable use of deadly force."

He said his office has been flooded with calls and emails asking "What are you gonna do about the murder of George Floyd?"

"We are going to investigate it as expeditiously, as thoroughly and completely as justice demands," he said. "Sometimes that takes a little time, and we ask people to be patient. We have to do this right."

When pressed why charges hadn't been brought in the case already despite the video evidence, Freeman said that it would be a "violation" of his ethics to discuss charging decisions prematurely.

"That video is graphic and horrific and terrible, and no person should do that," he said. "But my job in the end is to prove that he violated criminal statute. And there is other evidence that does not support a criminal charge. We need to wade through all of that evidence to come through with a meaningful determination, and we are doing that to the best of our ability."

Freeman, MacDonald and other officials also urged protesters to keep their demonstrations peaceful and avoid harming innocent individuals and businesses.

"We support peaceful demonstration," Freeman said. "Violence hampers our case, it takes valuable police resources away from our investigation, and it also harms innocent people."

Earlier in the day, St. Paul police wrote on Twitter that officers encountered looters and vandals near the Target store on University Avenue and elsewhere. Police said they were met with protesters hurling rocks, liquor bottles and bricks.

Sarah Danik, a reporter for the local Fox 9 TV station, shared images that she said were taken at the scene beginning around 3 p.m. They show crowds of masked protesters and police officers, and crashing or banging noises can be heard in some of the videos. In one image, a cloud of smoke, which she identified as tear gas, is seen rising from the sidewalk.

“Officers are giving dispersal orders to groups gathered in various areas of the city, damaging property and attempting to steal from businesses,” the St. Paul Police Department tweeted.

By 4:30 p.m., Danik tweeted that the crowds had dispersed, and she posted a photo that showed a small fire burning in the parking lot near a police vehicle. But not long after that, police said officers were being struck with thrown objects once again.

“Please keep the focus on George Floyd, on advancing our movement, and on preventing this from ever happening again,” he tweeted. “We can all be in that fight together.”

On Wednesday night, looters ransacked a Target store off East Lake Street in Minneapolis, which is near the city police department’s 3rd Precinct building, according to Fox 9.

A protester runs away from where police deployed chemical irritants near the 3rd Precinct building in Minneapolis on Wednesday, May 27, 2020, during a protest against the death of George Floyd in Minneapolis police custody earlier in the week. (Christine T. Nguyen/Minnesota Public Radio via AP)

In the video that prompted the protests, which was released earlier this week, Floyd pleaded for his life and said he couldn’t breathe. Numerous bystanders asked the responding officers to take the pressure off of his neck and check his pulse.

Floyd was unconscious by the end of the clip, which is several minutes long. Medics arrived in an ambulance to load him onto a stretcher, and he appeared limp. He was later pronounced dead.

Lawmakers on both sides of the aisle have voiced concerns over the video, with President Trump tweeting Wednesday night that he had requested the FBI to open an investigation into Floyd’s death.

“My heart goes out to George’s family and friends,” Trump wrote. “Justice will be served.”

The president and Attorney General William Barr are both actively monitoring the investigation, MacDonald said.