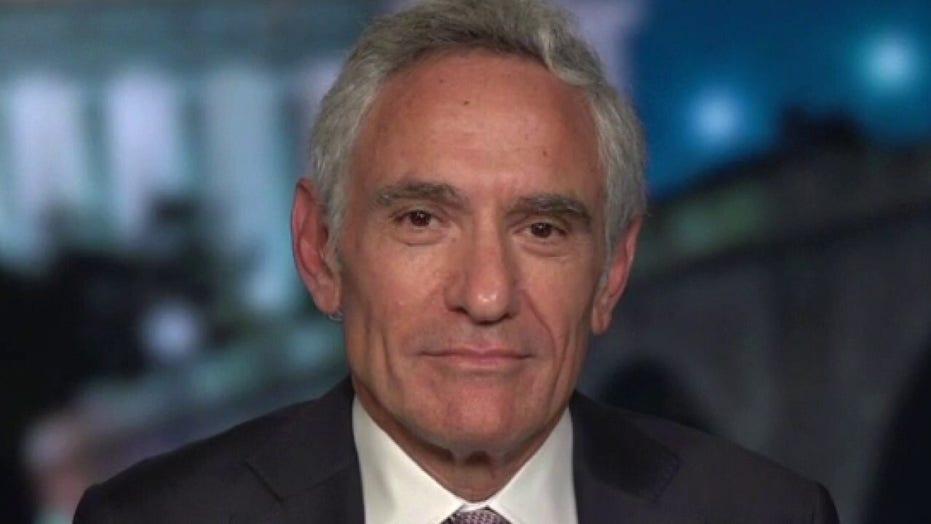 A fiery pro-Trump crowd gathered in a northern Chicago suburb Friday after an anti-Trump display critical of the president's handling of the coronavirus was placed at a busy intersection in the downtown area.

"We were only anticipating 15 people coming," organizer Peter C., a Northbrook, Ill., high school student, told Fox News. "We got a lot more than 15."

The crowd opposed what's been dubbed the "Coronavirus Death Scoreboard," which was unveiled at a public park in Northbrook. The sign, organized by liberal activist Lee Goodman of Peaceful Communities, features a running total of the U.S. death toll from the pandemic, and reads "We're #1.

"We were only anticipating 15 people coming. We got a lot more than 15."

It also includes President Trump's name at the bottom. The display has been repeatedly vandalized and has sparked polarizing reactions among residents.

While informal gatherings have protested the sign throughout the week before Peter C.'s protest on Friday.

A pro-Trump group gathers Friday after an anti-Trump display was unveiled in Northbrook, Ill.

At least 50 pro-Trump protesters proudly waved flags and signs supporting the president in a town that's widely perceived as being quite liberal.

A much smaller group of anti-Trump counter-protesters gathered across the street. Many of the cars passing through honked in support of President Trump, some even waved their own Trump banners from their vehicles.

A few people booed the pro-Trump crowd. One young woman yelled, "F--- you!" and raised her middle finger as she blasted the 2016 song "FDT (F--- Donald Trump)" by rappers YG & Nipsey Hussle from her car stereo.

While the coronavirus sign ignited a political firestorm, Peter insisted that the demonstration he organized goes far beyond protesting the anti-Trump display.

"We're here to protest for the reopening of our schools, our education system, and the funding of our police," Peter, a junior and moderator of his high school's conservative page on Instagram, told Fox News. "You don't see the Republicans attacking other people. It's all the liberals who are attacking us, who are attacking our police, saying 'Black Lives Matter' and 'Defund the Police.' If you want to defund the police, who the hell do you think is gonna come to save you when someone is breaking into your apartment?"

"You don't see the Republicans attacking other people. It's all the liberals who are attacking us."

Despite numerous heated clashes between the pro-Trump and anti-Trump demonstrators, the gathering remained peaceful as the police maintained a heavy presence.

A group of Trump supporters wave flags in the northern Chicago suburb of Northbrook on Sept. 25.

Both groups came prepared with chants and taunts that provoked the other side. The pro-Trump demonstrators, a largely younger crowd with many of Peter's high school classmates, shouted "Back the blue!" which prompted the anti-Trump crowd to chant, "Black lives matter!" which in return prompted the Trump backers to holler, "All lives matter!"

The majority of the Trump supporters waved campaign gear and American flags. The opposition had a few Biden campaign signs but many held homemade posters with various anti-Trump slogans like, "Love Trumps Hate," "Pro-America, Anti-Trump," "You can't fix stupid, but you can vote it out," and the Mary Poppins-inspired, "Super Callous Fragile Racist Sexist Lying POTUS."

A group of anti-Trump protesters gathered across the street from a pro-Trump demonstration on Sept. 25 in Northbrook, Ill.

Two Northbrook residents, Richard and Florence, showed up at the demonstration in protest of the anti-Trump display, calling it "defamatory" toward the president.

"Over 200,000 people have died. ... Every death loss is terrible, but it isn't the president's fault." Florence told Fox News. "They will not acknowledge that it came from Wuhan, China. They're not telling the truth."

"I think the liberals over there have a few people that have no answers," Richard pointed across the street. "They've been sitting here now for the last hour swearing at us, giving us the finger, calling the president a racist. When I went over there to ask them how he's a racist, they have no answers. ... They just repeat what they hear on MSNBC, CNN, and all the liberal networks. ... They have a blind hatred for the president -- and no answers to why."

"They have a blind hatred for the president -- and no answers to why."

Florence said she believes there's a lot of "closet Trumpers that are finally coming out of the closet" because they're "tired of a spin that's not true." Richard similarly told Fox News that some people were "afraid" to put Trump signs outside their house because they feared "vandalism and retribution."

Several vehicles honked in support of President Trump during a demonstration on Sept. 25 in Northbrook, Ill.

Critics knocked Lee Goodman, the man behind the anti-Trump display, who was seen across the parking lot watching the commotion from afar.

According to local news outlet Patch, the Northbrook Village Board discussed whether the polarizing display should be taken down because of the outcry from residents. The board ultimately agreed with village attorney Steven Elrod recommendation against removing the display, which is located in a public park near the downtown area, arguing its removal would violate the First Amendment.

A 'scoreboard' showing the coronavirus death toll was put on display in Northbrook, Ill

At the meeting that was held Tuesday evening, village President Sandy Frum read emails aloud that expressed outrage toward the sign.

"The sign needs to come down as soon as possible. It is appalling that the village would allow for such a sign to be displayed, especially because it has a clear political message. Take it down," Northbrook resident Victoria Fisher wrote.

Another said the resident was shocked and disappointed that the board approved of political speech.

"Approving members of the board were delinquent in their responsibilities to uphold the rules prohibiting political signs," Mark Cassell said. "Northbrook is a kind, peaceful community. There is no place for ugliness of politically motivated propaganda anywhere, especially on taxpayer-funded public grounds."

"Northbrook is a kind, peaceful community. There is no place for ugliness of politically motivated propaganda anywhere, especially on taxpayer-funded public grounds."

Not everyone was opposed to the display.

"As someone who is at high risk for COVID, I strongly support Lee Goodman's sign," Catherine Caporusso of Northbrook wrote. "Quarantine fatigue is well-documented and is rampant in Northbrook. ... The sign is a reminder of how important it is to wear a mask."

The anti-Trump display in referred to as the 'Coronavirus Death Scoreboard' was vandalized on evening of Sept. 22 in Northbrook, Ill.

Last week, Goodman told Patch, "This display is a reminder of the continuing need to take precautions. Schools and businesses are reopening, but the disease is still spreading and people are still dying."

"The U.S. has the highest number of COVID-19 deaths in the world," Goodman said. "It is a tragedy and a disgrace that we have failed to do all we could to confront this public health crisis, and as a result, many people have died unnecessarily. But, we can do better in the future. We hope that public awareness will lead people to demand a more effective response by our federal government."