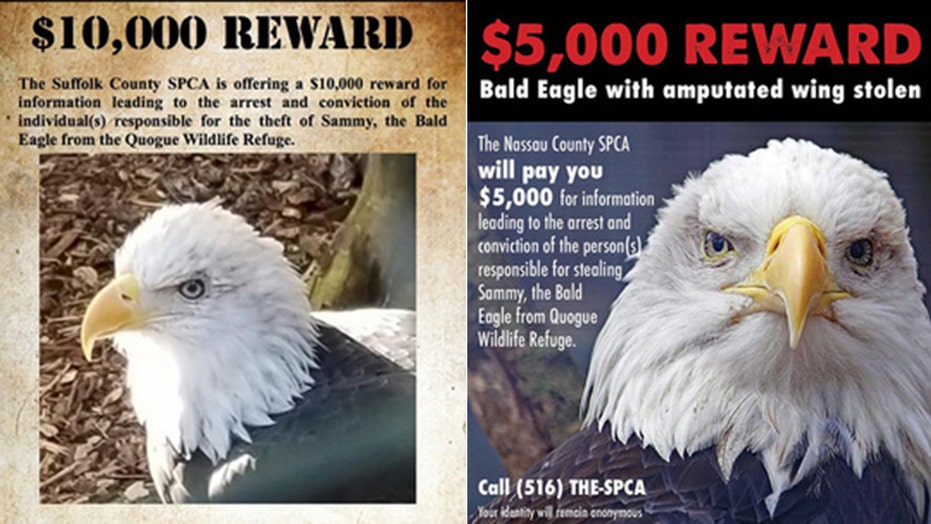 Police on Long Island have upped the reward for the return of a bald eagle that was kidnapped earlier this month to $20,000.

The 35-year-old eagle named Sam was stolen from the Quogue Wildlife Refuge July 16 after someone cut the fencing around the bird's enclosure sometime between 2:15 a.m. and 4:15 a.m., Suffolk County police said.

Marisa Nelson, the refuge's program director, said staff members were "shocked and confused at first because the padlock remained on the outside of his cage."

"It's not something we've ever had to deal with before," Nelson said in an interview posted on the refuge's Facebook page Tuesday.

Nelson said surveillance footage showed a person coming through the refuge's parking lot in the early hours of the morning with a backpack and leaving with a "satchel or a bag" in his hand.

The bald eagle is a federally protected species, which makes possession of them illegal and is punishable by fines and jail time. Sam had been living at the Suffolk County refuge for more than 30 years and suffered a gunshot wound in the 1980s. As a result, his right wing was partially amputated, rendering him unable to fly.

"He will be stressed and cannot survive without our care," the refuge said in a Facebook that included a video of the bird. "We want him back unharmed."

Nelson said it is possible that the kidnapper took the bird because of the black market demand for bald eagle feathers, although she couldn't say for certain what the suspect's motive could be.

"We are touched by the concern and offerings of support for the safe return of our eagle Sam," the refuge posted on its website."The Quogue Police Department and many other organizations are working hard on this case."

Three Long Island groups are pooling their resources to offer the reward money to anyone whose information leads to the arrest and conviction of whoever snatched the bird.