Investigation begins into what led to deadly helicopter crash in Manhattan

The NTSB is getting their first look at the crash site atop a skyscraper in Midtown Manhattan after a private helicopter crashes on a roof, killing the pilot; Bryan Llenas reports from the scene.

The pilot who died after crashing a helicopter on the roof of a New York City high-rise earlier this month was flying “erratically” and “did not know where he was”  moments before the fatal accident, the National Transportation Safety Board said in a preliminary report released Tuesday.

Tim McCormack died on June 10 after his twin-engine Agusta A109 crashed onto the roof of 787 Seventh Avenue in Midtown Manhattan at around 2 p.m. during less than favorable weather conditions.

According to the NTSB report, McCormack had flown earlier from Amenia, New York to the heliport at Atlantic Aviation 6N5, making one stop along the way in the Hudson Valley, along with one other passenger.

He waited in the lobby of the heliport for around two hours where “he was continuously checking weather conditions using his tablet computer.” McCormack reportedly told staff that he saw a “twenty-minute window to make it out,” before heading back alone to the helicopter for takeoff.

Data collected by the Federal Aviation Administration showed the path of the aircraft that lead to its eventual crash. McCormack first flew south over the East River, before changing his direction northbound. Around 5 to 7 minutes after takeoff he radioed to the Atlantic Aviation heliport that he wanted to return has he “did not know where he was.”

The massive emergency response on Monday after a helicopter crashed on a building in New York City. (Greg Norman/Fox News)

The NTSB stated in its report that McCormack “flew erratically over the East River, changed course and altitude several times before making a 270-degree turn” back to the airport before again changing direction and crashing into the high rise. 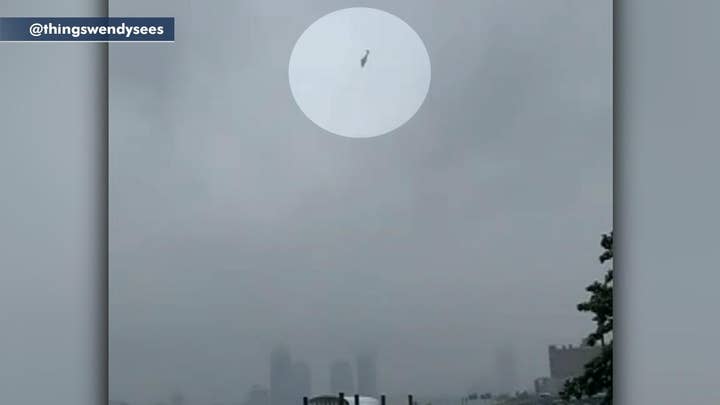 “A witness recorded video of a portion of the flight as the helicopter was flying in and out of clouds. The helicopter descended rapidly from the clouds in a nose down pitch attitude, appeared to initially transition to a level pitch attitude before climbing into the overcast cloud ceiling and out of view,” the report stated.

The crash site was contained to a 100 feet long by 20 feet wide area where investigators say the seven-seat helicopter was severely damaged and engulfed in flames.

A look into McCormack’s experience found that he held a commercial pilot certificate with a helicopter rating since 2004 and he had reported over 2,800 hours of total flight experience.