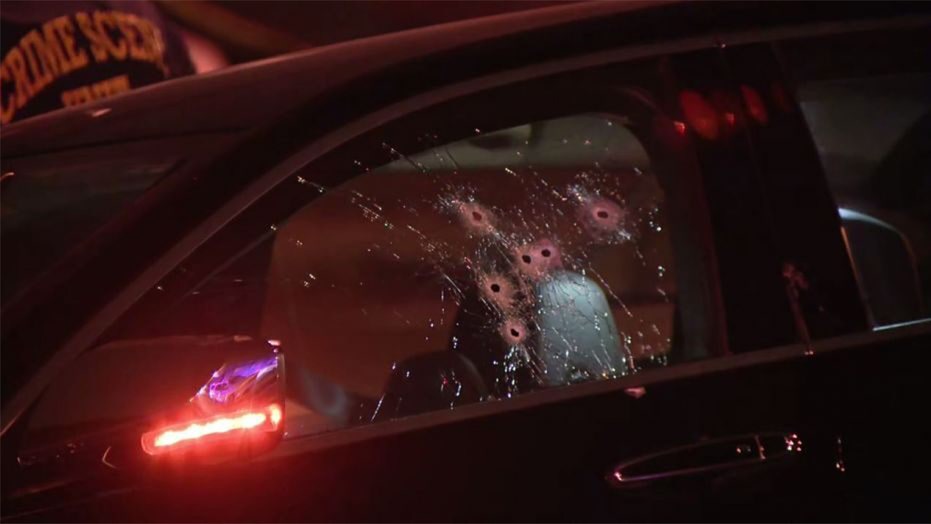 As many as four shootings unfolded in the span of just four hours late Saturday night into early Sunday morning in Philadelphia, leaving two people dead, according to reports.

The violence began around 11 p.m. Saturday when a 33-year-old man was shot in the back on Hartville Street. Paramedics took him to a hospital in stable condition, WPVI-TV reported.

About an hour and a half later, a 22-year-old man and a 20-year-old woman reportedly were shot while sitting in a car in Philadelphia’s Germantown neighborhood. The unidentified man was hit three times; once in the head, shoulder and chest, Fox 29 reported, adding that the 22-year-old was pronounced dead at a hospital.

A 22-year-old man and a 20-year-old woman reportedly were shot while sitting in a car in Philadelphia’s Germantown neighborhood. The man was said to have driven off before crashing into parked cars. (Fox 29)

The woman reportedly was shot once in the foot and was hospitalized in stable condition.

After the man was shot, he drove off and later crashed his car into several parked cars, the station reported, citing police.

The shooter allegedly fired 15 shots into the car, WPVI-TV reported.

The shooter in the second incident reportedly fired 15 shots. (Fox 29)

No arrest have been reported.

Around 2:30 a.m., the Philadelphia Police Department reportedly responded to another shooting just two miles away. In that incident, two men were shot as they were sitting in a car at a red light in the city’s Hunting Park neighborhood, according to WPVI-TV.

The station reported that the two men got into an argument with the people in the car next to them when someone in the other car pulled out a rifle and fired, injuring both men in the other car.

In another shooting early Sunday, a 32-year-old man with a gunshot wound to the chest reportedly managed to drive to a hospital and was listed in critical condition. (Fox 29)

A 32-year-old man with a gunshot wound to the chest reportedly managed to drive to a nearby hospital and was listed in critical condition. His 27-year-old passenger died from three gunshot wounds to the head, the news outlet reported, attributing police.

The man who died has not yet been identified and no arrests have been reported, according to Fox 29's reporting.

About a half-hour later, another shooting in Hunting Park was reported.

A 42-year-old man was shot multiple times in his lower body and paramedics rushed him to a hospital in critical condition, police said.

Investigators reportedly were looking into whether all the shootings were connected.