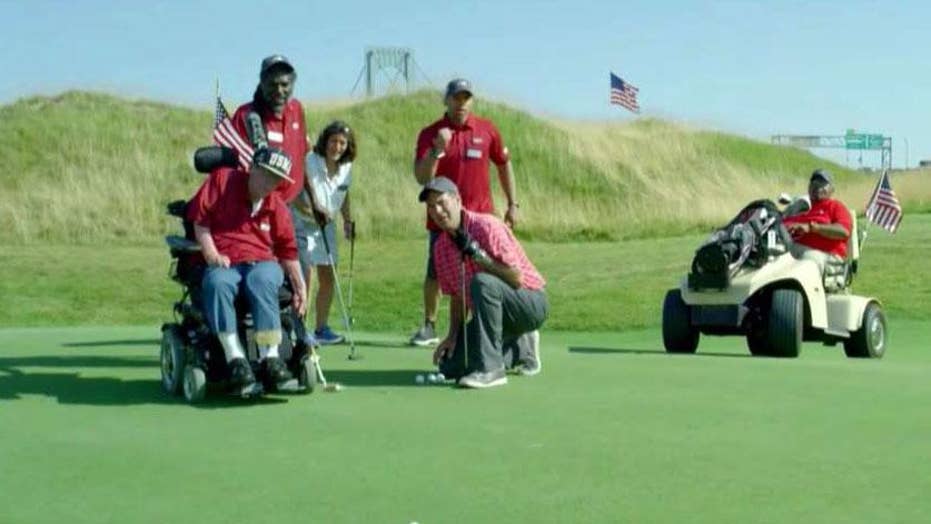 The program has helped more than 3,500 veterans leave their problems behind for a day; Lucas Tomlinson has the story for 'Special Report.'

Chris Nowak lost his leg in a friendly-fire training accident, but the Marine Corps veteran doesn’t let his injury keep him from his work with the PGA's Hope program, dedicated to helping veterans heal through the game of golf.

"This has been the best therapy I have ever done," said Nowak. "They are interacting with their fellow veterans, integrating back into society, but more importantly giving them that moment in time [where] we are allowing them to focus on something other than their injury."

The PGA Hope program has helped more than 3,500 veterans enjoy the game through the camaraderie of like-minded patriots. Clubs across the nation have volunteered to host six-week programs allowing wounded veterans the opportunity to learn from top professionals and play exclusive courses at no charge.

Retired U.S. Army Sergeant First Class Ramon Padilla saw some of the Afghanistan war's toughest fighting in the Korengal Valley, known as the "valley of death."

"I have my weapon, which is my club. I have my balls, which are my bullets. I have the flag, which is my target. It's being in the military. I just don't have golf balls shooting back at me,” said Padilla.

Padilla lost his arm when an RPG slammed into his outpost in eastern Afghanistan in 2007. He spent two years recovering at Walter Reed Medical Center outside Washington, D.C.

"I still think I have two arms so I imagine myself and I picture my shot and this is my arm so that’s the way I see it," Padilla said.

Fox News spoke to Nowak and Padilla at Congressional Country Club in Bethesda, Md., just outside the nation's capital.

“It’s unbelievable that these folks can come out after being in such intense environments, he added. “If there is something we can do to just help them along, we are very proud to be able to do that.”

PGA Hope also has the support of the golfer many call the greatest to ever pick up a club.

"It takes a nation to heal our veterans, now it’s our turn to fight for you--to offer every chance for a healthy and successful life,” said Jack Nicklaus, winner of a record 18 major championships, in promotional video for the program.

For six weeks, 10 PGA professionals from Congressional volunteered their time. For the veterans, that goes a long way.