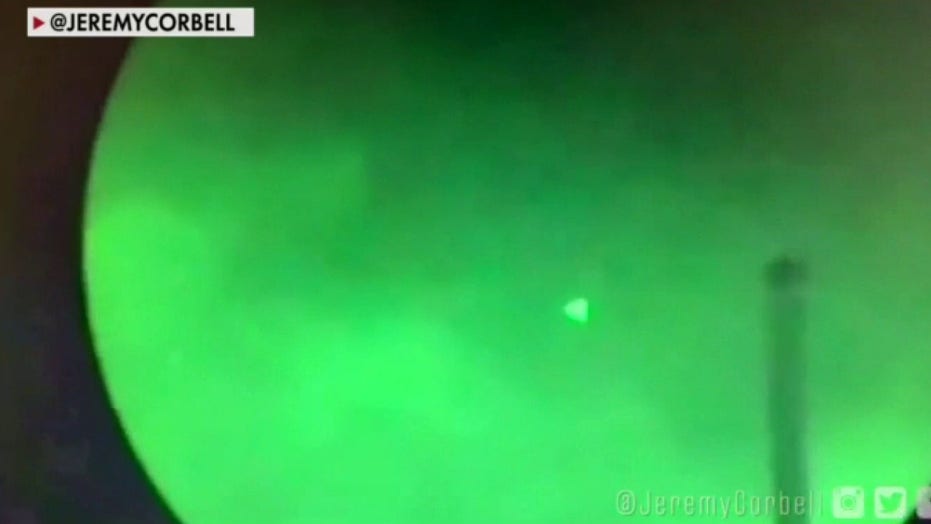 Tucker reacts to video of UFO confirmed by Pentagon

The U.S. government is actually gearing up to share information about the "reality" of UFOs with the public — and not a moment too soon, says the man who claims to have run the Pentagon’s UFO program for 9 years.

Former President Donald Trump’s $2.3 trillion appropriation bill for 2021 contained a mandate that the Pentagon and spy agencies must file a report about "unidentified aerial phenomena" or UAP. Most of us just call them flying saucers or UFOs.

Whatever the jargon, noted whistleblower Luis Elizondo — former head of the Advanced Aerospace Threat Identification Program, which operated out of the secretive fifth floor of the Pentagon’s C Ring — told The Post about the resulting blockbuster document, which is reportedly slated for release in June.

PYRAMIND-SHAPED UFOS SPOTTED BY NAVY MAY BE THE BEST 'THE WORLD HAS EVER SEEN,' FILMMAKER SAYS

Tied to the mandate, Elizondo said the upcoming report touches down on the unexplainable. Longtime UFO believers are hungry for explanations of the tic-tac-shaped objects the Navy encountered in 2004, the strange "cubes within spheres" seen by Navy pilots in 2014, or the mysterious black triangles continually reported around the world.

Such details promise to come via the much anticipated report — and at least one evolution of belief: "I think the government has acknowledged the reality of UAP," Elizondo exclusively told The Post, despite signing what he refers to as a "lifelong" NDA before he resigned from the Pentagon in 2017. "I think they all want answers and I think they are all willing to ask the hard questions."

During a press conference this week, Elizondo made clear that UFOs have been observed to have qualities that are nothing less than otherworldly. He described vessels flying at 11,000 miles-per-hour and being able to turn "instantly." Providing a comparison, he explained, for our most advanced jets going at the same speed, "if you wanted to make a right-hand turn, it would take you about half the state of Ohio to do it."

He also detailed Spielberg-worthy operational capabilities that fall into the realm of "transmedium travel." Elizondo explained that the eye-popping vessels can fly 50-feet above the Earth’s surface or 80,000 feet in the sky and even submerge underwater without a compromise in performance: "When you see that, you recognize you are dealing with a technology more advanced than ours."

That was despite apparent threats to security of the United States. Elizondo was particularly disturbed by the locations where UFOs or UAPs tended to hover.

Even the way in which these inexplicable flying-machines manage to lift-off blows away rational engineering. "[These] things have no wings, no cockpits, no control surfaces, no rivets in the skin, no obvious signs of propulsion — and somehow they are able to defy the natural effects of Earth’s gravity," Elizondo said. "How is that possible?"

The existence of the AATIP wasn’t revealed until 2017, along with what Trump described as a "hell of a video" montage captured by the Navy featuring a dark circular object flying in front of a military jet, along with another small object racing over land at astonishing speeds in 2004 and 2015, respectively. The Department of Defense confirmed the authenticity of the footage, and a Navy spokesman confirmed the objects in the videos to be UAP.

At the time, former Senate Majority Leader Harry Reid (D-Nev.) took credit for arranging $22 million in annual funding for the AATIP, telling the New York Times that it was "one of the good things I did in my congressional service."

By 2019, the Pentagon had confirmed to The Post for the first time that they research and investigate UFOs and continue to do so.

However, for generations, and for all the wrong reasons, national security bigwigs did not want to release more information to the public, Elizondo claims.

"They felt that it made them look inept," he said. "They felt in some cases that it challenged their philosophical and theological belief systems … They just couldn’t process it."

If this starts to sound like a "Twilight Zone" episode – Elizondo talks about UFOs pulling as many as 700 G-forces when our most technologically advanced aircraft can stand only 17 before falling apart (and that’s to say nothing about pilots at the controls) — it’s easy to hope for a fast and satisfactory wrap-up.

Clearly, that is what Elizondo is gunning for.