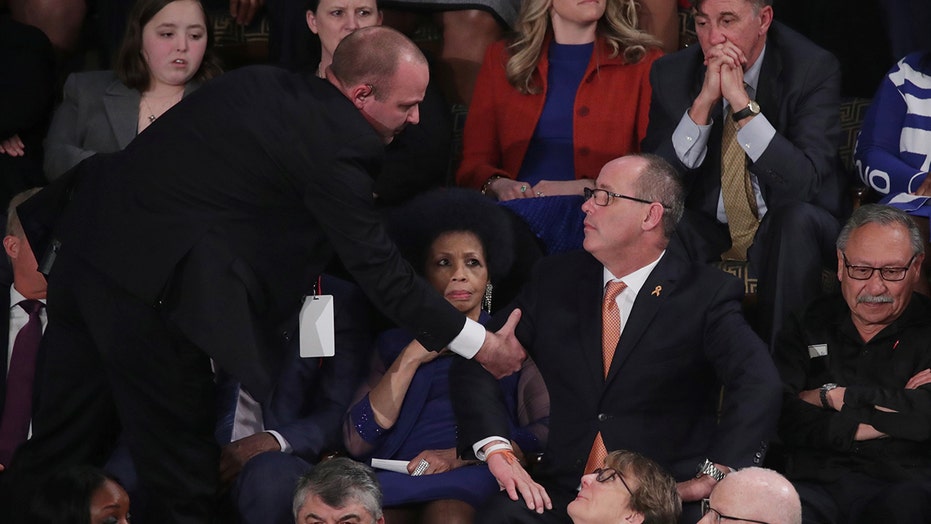 The father of a Parkland shooting victim was removed from the House chamber gallery Tuesday night for shouting about gun control during President Trump’s State of the Union address.

Gun control activist Fred Guttenberg briefly interrupted the president after Trump vowed to “always protect your Second Amendment right to keep and bear arms,” as long as he is in the White House. The moment was not visible on the television broadcast of the event, though viewers could hear a man shouting before both Vice President Mike Pence and House Speaker Nancy Pelosi appear to glance up at the gallery for a moment.

Fred Guttenberg, father of Parkland school shooting victim Jaime Guttenberg, is ejected after shouting during President Trump's State of the Union address to a joint session of the U.S. Congress in the House Chamber of the U.S. Capitol in Washington, on Feb. 4, 2020. REUTERS/Tom Brenner

Guttenberg was one of Pelosi's guests for the State of the Union. She seemed to make "calm down" gestures with her hands while saying something to herself as she peered up into the gallery after the moment.

Guttenberg’s daughter Jaime was one of 16 children murdered in the mass shooting at Marjory Stoneman Douglas High School in Parkland, Fla., in 2018. She was 14 years old.

Guttenberg has become something of an advocate against gun violence in recent years and is a regular on Capitol Hill. His organization, called Orange Ribbons for Jamie, is dedicated to "supporting programs that were important to her, as well as those dedicated to pursuing common sense gun safety reforms."

STATE OF THE UNION: THESE NOTABLE GUESTS HAVE BEEN INVITED BY LAWMAKERS

Guttenberg apologized after the speech.

"Tonight was a rough night," he tweeted. "I disrupted the State of the Union and was detained because I let my emotions get the best of me. I simply want to be able to deal with the reality of gun violence and not have to listen to the lies about the 2A as happened tonight.

"That said, I should not have yelled out. I am thankful for the overwhelming support that I am receiving. However, I do owe my family and friends an apology. I have tried to conduct myself with dignity throughout this process and I will do better as I pursue gun safety."

This was not the first viral moment Guttenberg had in the nation's Capitol. He attended the confirmation hearings for Justice Brett Kavanaugh, who was also at Trump's address Tuesday, and attempted to shake the then-judge's hand. On a day that his confirmation hearing had been interrupted several times by protesters, Kavanaugh did not recognize Guttenberg and seemed to ignore the handshake.

"As Judge Kavanaugh left for his lunch break, an unidentified individual approached him. Before the Judge was able to shake his hand, security had intervened," Shah wrote on Twitter.

Guttenberg disagreed with Shah's account, noting that he had been in the hearing room the entire day and was introduced by Sen. Dianne Feinstein, D-Calif.

Many spoke out in defense of Guttenberg's comments on Tuesday night and Wednesday morning, despite his apology. David Hogg, who attended the same school as Guttenberg's daughter, took to Twitter to join the hashtag "#ImWithFred."

"[Guttenberg] lost his daughter in the Parkland shooting and has worked every day since to end gun violence," Hogg said. "Tonight he stood up to a president that believes peace and the Second Amendment are mutually exclusive and was removed."

Guttenberg also tweeted about gun violence earlier in the day, unloading on Sen. Marco Rubio, R-Fla., in response to the senator tweeting a Bible verse.

"On the day of my distress I call to you, for [sic] you will answer me," Rubio tweeted.

"[Rubio], are you calling to me? I will answer," Guttenberg posted. "You are still pathetically weak. We are 10 days from the two-year mark of my daughter's murder. You have still done nothing about gun violence. As you are choosing to be irrelevant, please remove yourself from the Senate."