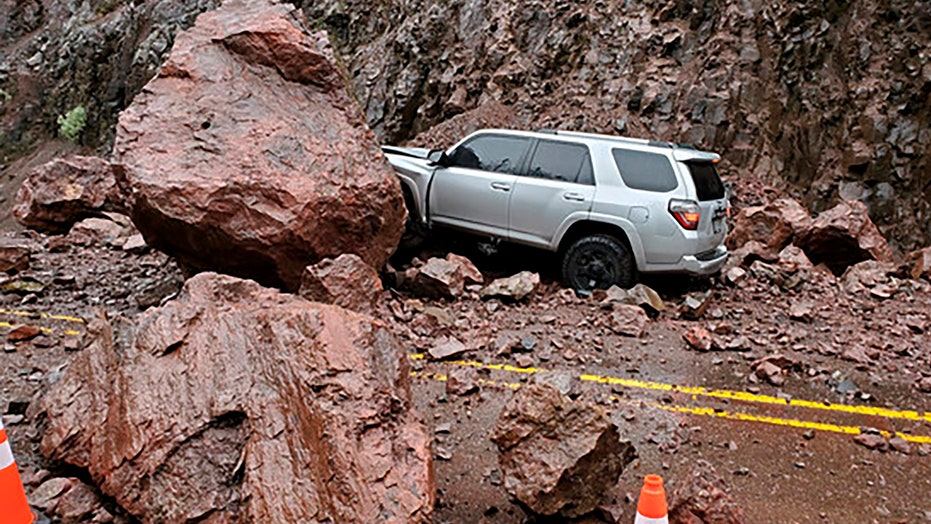 Unrelenting rain and mountain snow in the Pacific Northwest are creating the threat of landslides due to the loosened ground.

The National Weather Service's Weather Prediction Center said that an active Pacific jet stream will bring the next round of rain into the region from Thursday night into Friday.

The NWS office in Portland said the city has seen rainfall on 28 of 29 days so far in January as of Wednesday.

All of that rain has led to landslides across the region.

On Tuesday, a highway near Crater Lake National Park in Oregon was closed for hours after two boulders the size of a small living room crashed down, narrowly missing a passing car.

Rockslides triggered by unrelenting rain have closed local roads and highways around Oregon, including a highway near Crater Lake National Park that was closed for hours Tuesday after two boulders the size of a small living room crashed down, narrowly missing the passing car. (The Oregon Department of Transportation via AP)

The driver still crashed into a large boulder and was transported to a Medford-area hospital, FOX12 reported. The man sustained injuries described as non-life-threatening.

Another landslide reported last Friday in Portland is expected to create road closures lasting through the weekend as crews work to stabilize a hill. Cracks are still visible at the top of the slide, according to FOX12.

A landslide risk also exists in neighboring Washington state due to soil saturated from high amounts of rainfall.

Two slides last weekend were cleared in time for the Monday morning commute as crews from the Washington State Department of Transportation continue to monitor hot spots.

Forecasters are warning that more heavy rain is in the forecast from Friday to Sunday, bringing several inches of rain to the mountains in western Washington.

"I think no matter where you go, when you go, people need to be aware of their surroundings, whether a car cuts you off in traffic or a mudslide around the next corner," Johnson told Q13. "Drivers need to be prepared to drive through the conditions."