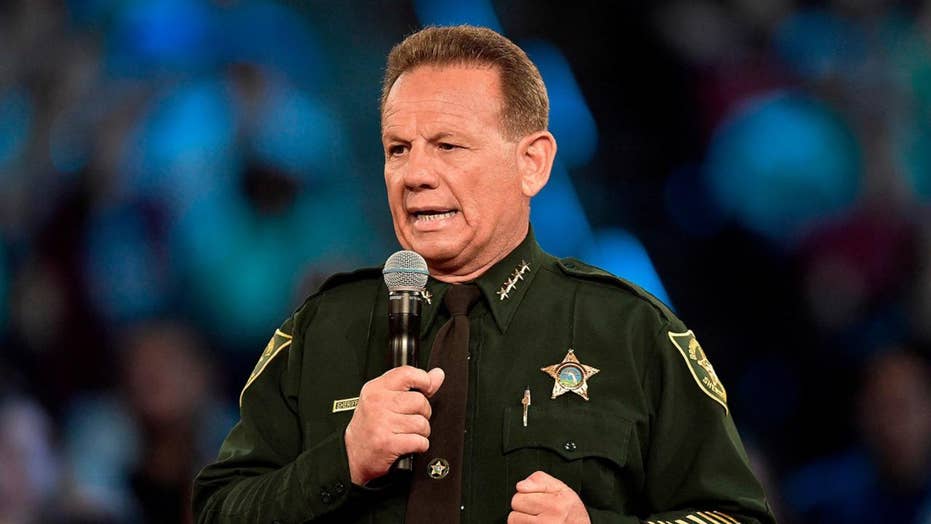 Broward County Sheriff Scott Israel, who faced criticism over his department's response to the deadly Parkland, Florida, school shooting last year, was officially suspended by newly sworn-in Gov. Ron DeSantis on Friday. DeSantis later tweeted that he was suspending Israel for 'his repeated failures, incompetence and neglect of duty.'

The former top cop of the largest sheriff's office in Florida -- who was booted from power earlier this year in the response to his handling of two mass shootings -- is running for his old job.

Israel was suspended by in January by Florida Gov. Ron DeSantis over "repeated failures, incompetence, and neglect of duty," in relation to the deadly Parkland, Florida, school shooting in 2018 and the Fort Lauderdale International Airport shooting in 2017.

Israel is fighting the suspension before the Florida Senate and had previously committed to running for the seat regardless of whether he was reinstated. A Senate special master is reviewing this case and could Rule on Israel's fate by the fall, according to CBS12.

Israel's lawyer has said that DeSantis' decision to suspend the sheriff was politically motivated.

“Nobody, no governor, should tell the people of any county who their sheriff should be. That’s what voters do,” Israel told CBS12 on Monday.

The former sheriff has faced scathing criticism nationally due to his handling of fatal shootings at the high school and airport.

Hunter Pollack, who lost his sister Meadow in the 2018 shooting, blasted Israel on Twitter after he announced he was running again for sheriff.

"Under his leadership, 22 innocent people died in two preventable mass shootings," he wrote. "His horrible policies led my sister to be defenseless when his deputies hid during gunfire."

In another blow to his former department, the Commission for Florida Law Enforcement Accreditation voted 13-0 last week not to renew the Broward Sheriff's Office's accreditation. Commission members include law enforcement and other local officials from across Florida.

They cited the agency's handling of last year's Parkland shooting and the 2017 airport shooting as reasons for the decision.

Last week, Israel's replacement, Sheriff Gregory Tony, said deputies Edward Eason and Josh Stambaugh were fired as a result of an internal affairs investigation for their inaction following the Feb. 14, 2018 school shooting. Two other deputies were fired in June for neglect of duty in connection to the February 2018 shooting. One of those was school resource officer Scot Peterson, who was also arrested on charges of child neglect, culpable negligence and perjury. Peterson's lawyer has said he will fight the charges

Tony plans to run again in 2020. In a prepared statement, Tony said that it's disheartening for the agency's 5,400 employees to lose their accreditation for the previous administration's mistakes.

"Since recently taking command, I have worked on improving BSO and repairing the effects of bad leadership and negligence by focusing on training and community relations," Tony said. "I will continue working hard to ensure that all Broward residents feel safe and that our agency's reputation and honor are restored."