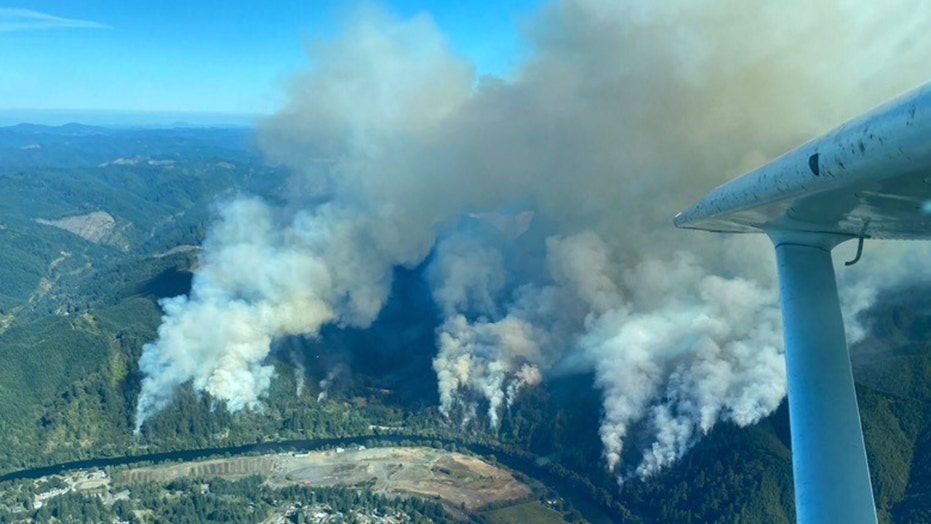 A wildfire in Oregon has burned some 380 acres as officials announced Tuesday a person has been arrested in connection with the blaze.

The Lane County Sheriff's Office said Elias Newton Pendergrass, 44, of Mapleton, was arrested and charged with arson in the first degree in connection to the Sweet Creek Milepost 2 Fire.

"The investigation was a team effort between Lane County Sheriff's Office Detectives and Oregon State Police Detectives, who together contacted and interviewed several individuals as part of the investigation into the origin of the fires," the sheriff's office said on Facebook.

The blaze was first reported around 2:30 p.m. on Sunday near Mapleton, located about 46 miles west of Eugene.

The Oregon Department of Forestry said that separate fires merged into one blaze and have since burned about 382 acres on private forestland near Mapleton.

Dozens of households are under evacuation orders due to the blaze, which is burning in the steep terrain on the south side of the Siuslaw River, FOX12 reported.

Forestry officials said that helicopters have been dropping water on the blaze, which is now 15% contained.

A change in the weather pattern in Oregon, including higher temperatures and lower humidity, will also usher in the potential for gusty winds.

"These conditions, combined with extremely dry fuels, will test fire lines over the next few days," the agency said. "Steep terrain also increases the likelihood of quick runs should spot fires emerge."

The Red Cross is currently providing accommodations for those affected by the blaze.