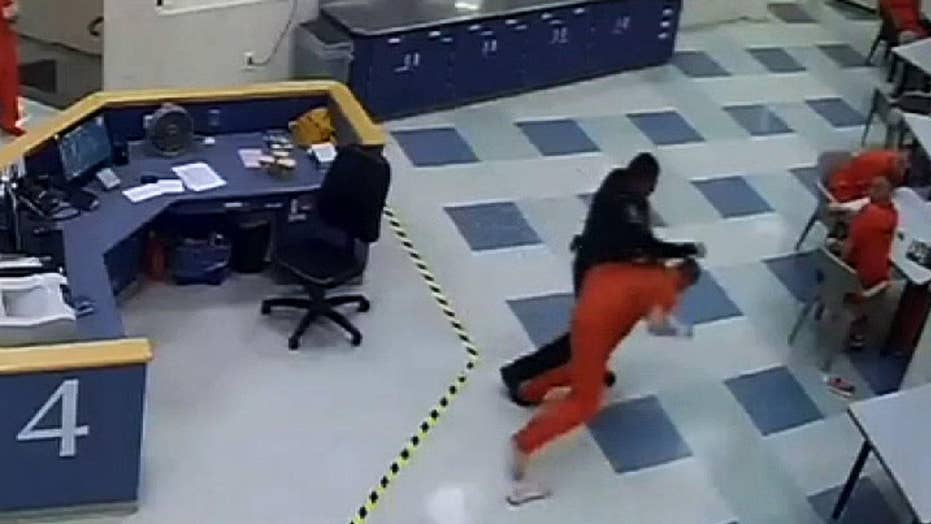 Inmate Hayden Davis sentenced to 30 months in prison for assaulting a sheriff's deputy in the Washington County Jail.

An Oregon man was sentenced to more than six years in state prison Wednesday after being convicted of breaking into a home and, a few weeks later, of attacking a jail guard in an assault that was captured on surveillance video.

The Washington County District Attorney's Office said in a news release that Hayden Landry Davis, 27, was sentenced to 74 months in prison and two years of post-prison supervision in connection to the incidents earlier this year.

Authorities said the 27-year-old used a hammer to smash a sliding-glass door and break into a home in Beaverton on Feb. 20, 2019, but was scared off by the resident inside. Davis, who injured himself and left DNA evidence at the site of the break-in, was located by authorities not far from the scene. He was bleeding from a cut to his hand, according to officials.

The suspect initially denied the allegations, but later admitted to breaking into the home. He was arrested and taken to the Washington County Jail. Nearly a month later, on March 31, Davis attacked a deputy from behind during recreation time, striking him several times in the face.

"No indicators, nothing," Corrections Officer Daniel Guzman told FOX12 on Wednesday. "He just lunged right at me and started punching."

Hayden Landry Davis was sentenced Wednesday to more than six years in prison for assaulting a corrections deputy while in jail for breaking into a home. (Washington County Jail)

Guzman said that up until the assault, he and Davis had never talked.

"I don't think I learned his name until about 40 minutes after the incident," Guzman told FOX12.

Video of the attack showed Davis approaching the deputy from behind as he was helping another inmate, and then launching into an attack, striking the deputy several times to the face. Guzman said Davis was armed with a wooden tongue depressor, amplifying the hit he took to his face.

Officials said the deputy suffered minor injuries while fighting off Davis with help from other inmates.

"Swelling on the upper left eye," Guzman told FOX12. "I did have some cuts on the face and some scratches on the left side of my face as well."

In addition to his prison sentence, a judge recommended that Davis pursue mental health and substance abuse programs while serving his sentence and imposed $500 in fines. Davis was also ordered by the judge to pay $571 in restitution to his victims and barred him from having any contact with them.