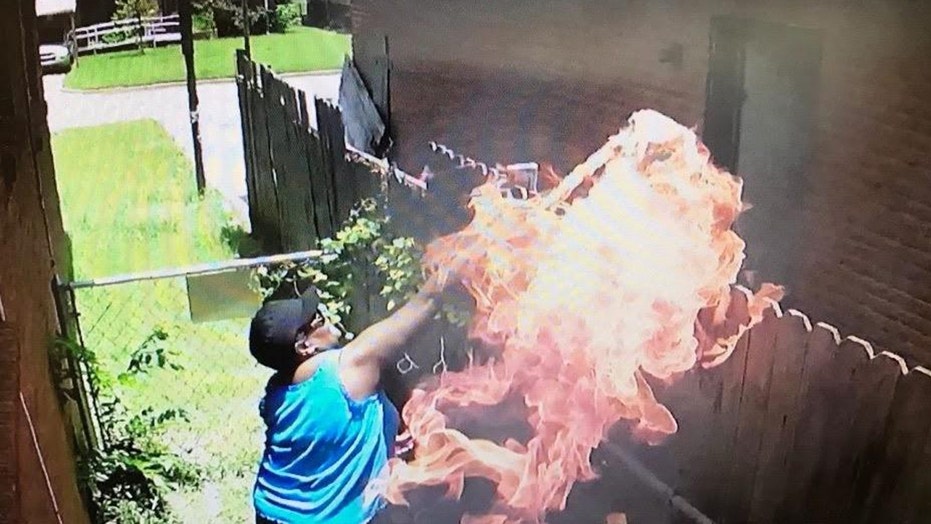 Investigators say an Oklahoma woman who torched an abandoned house next door to her was ultimately burned by her own home security system.

Annie Durham, 59, was arrested by the Del City Fire investigators and charged with second-degree arson charges after authorities say she “intentionally set” fire to her neighbor’s already condemned home on June 10.

The key evidence? Surveillance footage from her password-protected outdoor camera that she'd given officials permission to look at.

The fire department received several 911 calls at around 2:45 p.m. reporting a house on fire in the 2000 block of Becker Place. Once on scene, firefighters observed a single-story residence with “a significant fire” coming from the garage.

A condemned home on Becker Place was allegedly set on fire on June 10  by an angry neighbor.  (Del City Fire Department )

Rescue teams confirmed the house was condemned and once the fire was controlled from the outside, firefighters advanced into the structure to check for possible victims.

No one was injured in the fire but investigators were called to look into the cause since the home was condemned.

During the investigation, authorities learned about an on-going conflict between the owner of the condemned home -- where vagrants and drug users had allegedly been crashing -- and the next door neighbor, Del City Fire Department said in a news release.

Investigators reportedly noticed a surveillance camera pointed directly at the area where the fire started -- but it was password protected.

Durham, however, gave authorities permission to view the footage.

Officials say that surveillance footage showed Durham tossing an object lit on fire into the window of the condemned home.

Investigators believe an on-going feud between neighbors is what prompted Durham to set fire to the house.  (Del City Fire Department )

“Regardless of the extent of a conflict, arson is never a solution to resolve a conflict,” Del City Fire Department Chief Brandon Pursell said. “The senseless actions of this person placed the lives of innocent neighbors and responding firefighters at a serious risk.”