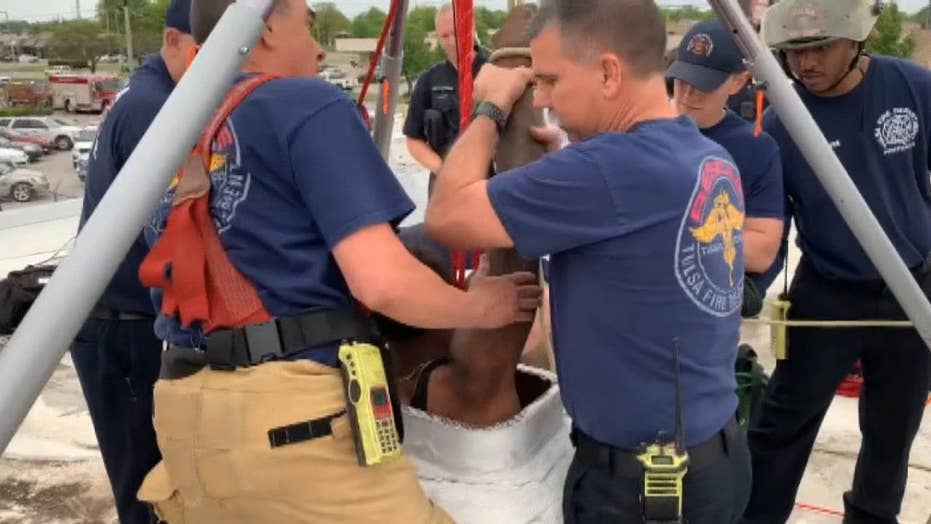 Man trapped in chimney for 9 hours rescued in Oklahoma

Firefighters pull man suspected of trying to steal copper from auto shop after he got stuck in a chimney for nine hours in Tulsa, Oklahoma.

The lesson is clear: leave the chimney work to the professionals. Like Santa.

And that note of caution is particularly true for those climbing in with bad intentions -- such as a would-be burglar who got caught at an Oklahoma business Monday after becoming trapped in a chimney for hours, officials said.

The Tulsa Fire Department told FOX23 the man had cut the electricity lines of an air conditioner and attempted to shimmy down the chimney of the business when he became stuck.

Eva Sigala, who works at the Durango Auto Center, said her boss raised the alarm when he heard noises emanating from the chimney early in the morning.

"Well he came in this morning and he heard a whining and crying noise and at first he thought it was a pigeon, because we get pigeons stuck in there all the time and he listened closer and heard 'help', that's when he left, closed the door and called the cops," she told FOX23.

Firefighters said surveillance video showed the man trying to Kris Kringle his way down the chimney around 12:30 a.m. Monday.

The man, who was not immediately identified, ended up stuck there until rescuers pulled him out around 9:45 a.m. Fire officials had at one point considered dismantling the entire chimney but eventually extracted the man via a pulley system.

The man did not sustain any injuries during the incident.