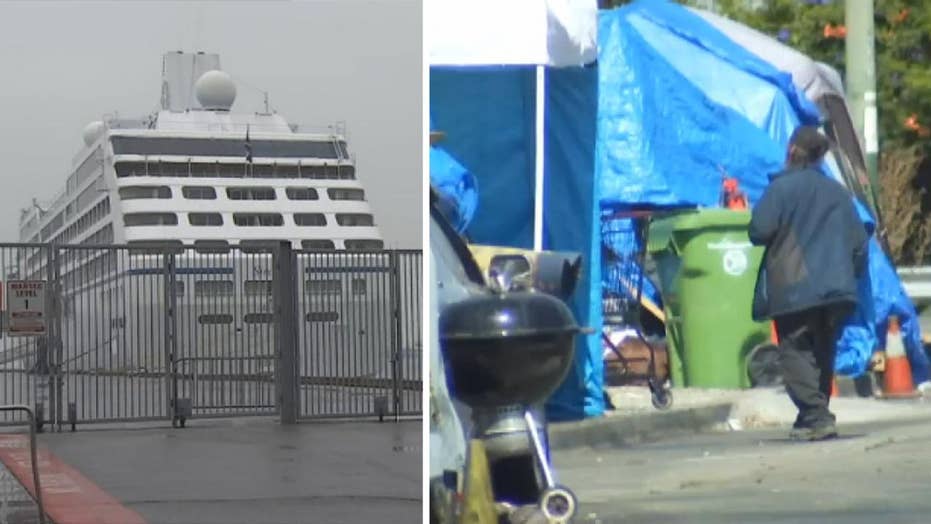 Proposal by the city council president would house around 1,000 homeless people on a cruise ship docked in the Port of Oakland.

This is not exactly "The Love Boat," but it could help make a dent in one California city's homeless crisis.

During a city council meeting on Tuesday, Oakland City Council President Rebecca Kaplan broached the idea of using a cruise ship to house up to 1,000 homeless people, suggesting a ship be brought to the Port of Oakland as the region deals with skyrocketing costs of living and a shortage of affordable housing.

“It could be a great way to house a lot of people quickly,” Kaplan told the San Francisco Chronicle. “Cruise ships have been used for emergency housing after natural disasters and for extra housing for things like Olympics.”

Homelessness has spiked in Oakland, with a 47 percent jump in two years — one of the largest surges of any California city, according to a one-night street count released in July.

The count, which used federal guidelines, showed Oakland had 4,017 homeless people, up from 2,761 in 2017. The increase has put the city's per capita homeless rate higher than neighboring San Francisco and Berkeley.

The president of the Oakland City Council in the San Francisco Bay Area is proposing bringing a cruise ship to the city's port to house up to 1,000 homeless people. (AP Photo/Ben Margot,File)

Kaplan told the Chronicle she plans to present a proposal to the council in January that will be at “no or low” cost to the city, because residents of the cruise ship would pay for rooms based on their income. The city would not buy the cruise ship.

The council president added that she has been contacted by cruise ship companies about providing a ship for emergency housing and that the companies – which were not named – were reaching out to the Port of Oakland about mooring options at the port. The idea for a cruise ship in Oakland would be similar to the Queen Mary in Long Beach in Southern California.

Rebecca Kaplan, the president of the Oakland City Council, is proposing bringing a cruise ship to the city's port to house up to 1,000 homeless people. (AP Photo/Jeff Chiu,File)

“It could be like that,” Kaplan told the paper. “But as affordable housing instead of hotel.”

But there may be a regulatory iceberg in the way of this floating proposal.

The Port of Oakland is among the 10 busiest in the nation, and port officials pointed out Wednesday that safety and security issues at federally regulated facilities would "make residential uses untenable," port spokesman Mike Zampa told the Associated Press.

Fox News embarked on an ambitious project to chronicle the toll progressive policies have had on the homeless crisis in five west coast cities: Seattle, San Francisco, Los Angeles, Oakland, and Portland, Ore.

“We respect President Kaplan's desire to address homelessness but Port of Oakland docks are designed to work cargo ships, there isn't the infrastructure to berth a cruise ship,” Zampa said.

One of the technical issues involving docking a cruise ship at the port is having the vessel permanently hooked up to shore power and sewage, in addition to regular, if not daily, garbage service, according to KTVU. There would also need to be considerations made for security on board and numerous health threats, such as norovirus.

Cruise ships have been used as emergency housing before. In the aftermath of Hurricane Katrina in 2005, the Federal Emergency Management Agency chartered three luxury cruise liners to provide housing for up to 8,000 people that were left homeless after the storm. That $236 million contract was later scrutinized in a study released in 2006 by House Democrats, which said it proved "wasteful for the federal taxpayer" because it ended up costing $50,000 to house a single person for six months, more than $300 per person for each night’s lodging.

While there may be a regulatory roadblock with the latest idea in Oakland, residents who are growing tired of the uptick in numbers said it doesn't hurt exploring.

"It would keep the homeless people out of the rain, especially during the wintertime," Dustin Koga told KTVU. "It's really cold right now, so it makes a lot of sense."

Robert Heyden, who said the city's homeless crisis is "not an easy problem to deal with," said the idea could be worthy, depending on the details.

"I think that would be a great idea," he told KTVU. "It would be interesting to see how the implementation happened and how successful it would be."