Senior correspondent Claudia Cowan provides updates on a devastating wildfire that is spreading near Yosemite National Park on 'America's Newsroom.'

The blaze, which has covered more than 18,000 acres and is California’s largest wildfire of the year, is being fueled by "extreme drought" and a "high tree mortality [and a] bark beetle infestation" in the surrounding area, forcing thousands of residents to evacuate from their homes, Natasha Fouts, a spokesperson for the California Department of Forestry and Fire Protection (or Cal Fire) told Fox News Digital’s Jiovanni Lieggi.

On Monday, the fire destroyed 21 homes and 34 other buildings and is about 16% contained, the California Fire Department said. It continues to threaten over 2,400 homes in the nearby areas, Fouts added. 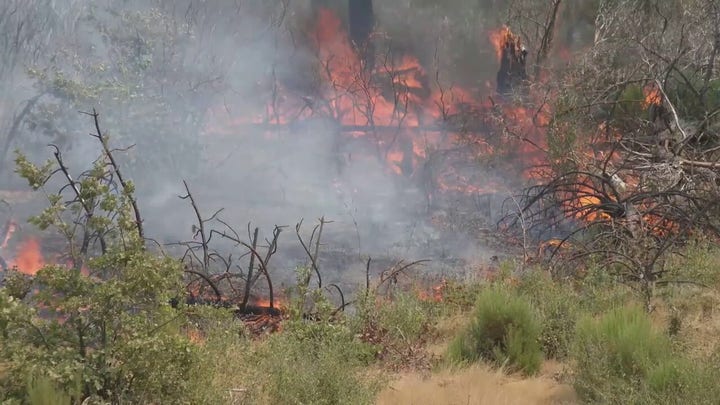 "This is the first fire we’ve had this season that is fast moving and destructive and we’re just getting started, so, I like to tell people to hope for the best but prepare for the worst," Fouts said.

Smoke from the fire could be seen from the San Francisco Bay Area and Nevada.

"During this fire, they were reporting long-range spotting, almost up to 2 miles ahead of the fire. With everything being so dry, high temperatures and low humidity, when embers do land ahead of the fire, it’s creating spot fires because the fuels are so receptive," she added.

The California Fire PIO also said the fire has moved into a populated neighborhood and the mixture of homes and forest "present challenges for firefighters" looking to douse the flames. By Monday, the fire had consumed more than 27 square miles of forest.

"We’re putting in fire lines and we’re battling this fire from the air and the ground. You can’t just put out a fire with just air support, you have to have boots on the ground," Fouts said.

CALIFORNIA’S LARGEST WILDFIRE OF THE YEAR BURNS NEAR YOSEMITE

"It was a successful day for aircraft and firefighters, resulting in minimal growth on the fire. Helicopters dropped 300,000 gallons of water on the fire. Crews continue to construct control lines and extinguish hot spots along existing lines," Cal Fire said in another statement Monday night.

The state is also enduring one of the worst droughts in decades, making dried vegetation further fuel for the raging flame.

She added: "The houses aren’t really close together, but you have what we call the wild urban interface where we have homes mixed in with forest so that presents challenges for firefighters as far as doing structure protection and makes evacuations difficult with narrow roads."

Gov. Gavin Newsom declared a state of emergency for Mariposa County on Saturday as thousands of more people remain in the fire's expected path.

Evacuations remain in place for over 6,000 people living in the fire zone.

Another wildfire in California, the Anzar Fire, which is burning in San Benito County, is 90% contained.

In Texas, a trio of fires has burned dozens of homes across the state.

A blaze in Balch Springs burned up to 20 homes, while the Chalk Mountain Fire near Glen Rose destroyed 16 homes and the Possum Kingdom Lake fire destroyed five homes.