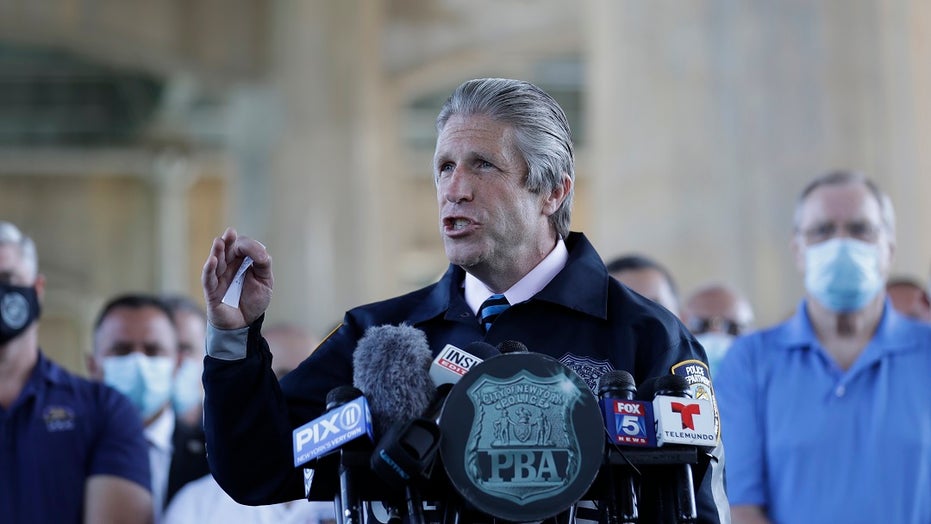 The head of New York City's largest police union on Tuesday denounced the four police officers involved in George Floyd's death, calling their actions an act of "murder" while also criticizing protesters who spread anti-police rhetoric amid widespread gatherings that have devolved into violent clashes between demonstrators and police.

“Not one woman or man that has a shield on their chest, a patch on their shoulder -- regardless of what arm of law enforcement they come from -- will support or defend a murder of an innocent person, and that’s what happened,” said Patrick Lynch, president of the Police Benevolent Association of the City of New York, during a news conference on New York's Randall's Island.

“Let us be unequivocal,” he added. “In all my time, I’ve never seen a time where not one law enforcement would support -- eight minutes is wrong. There was no struggle. There was no reason. So, I know I speak on behalf of every police officer here: It was wrong, we denounce it, and we have from the beginning.”

Floyd died May 25 following an arrest in Minneapolis in which Derek Chauvin kneeled on Floyd's neck for nearly nine minutes. Video of the encounter has prompted outrage and weeks of daily protests calling for sweeping police reforms. Chauvin was fired and has been charged with second-degree murder.

Some have called for defunding police departments, and clashes between demonstrators and police have sometimes turned violent. Around 300 NYPD officers have been injured since the protests began two weeks ago. More than 700 complaints have been made against the department in the same time frame, according to the Civilian Complaint Review Board, the civilian body that oversees the police agency.

“We’ve protested,” Lynch said, according to the New York Post. “We believe in it and we believe in their rights, but now we’re being guided by those that were intent on violence from outside our communities, that threw the stone, that broke the window, that caused the violence that injured 300 police officers, some viciously. That’s who we denounce.”

He also criticized lawmakers for passing a series of police reform bills this week, including a ban on chokeholds. State senators passed a bill to repeal 50A, a section of the New York State Civil Rights Law that shields police officer disciplinary records from the public -- a measure the police union opposes.

After the news conference, Lynch turned to the officers behind him.