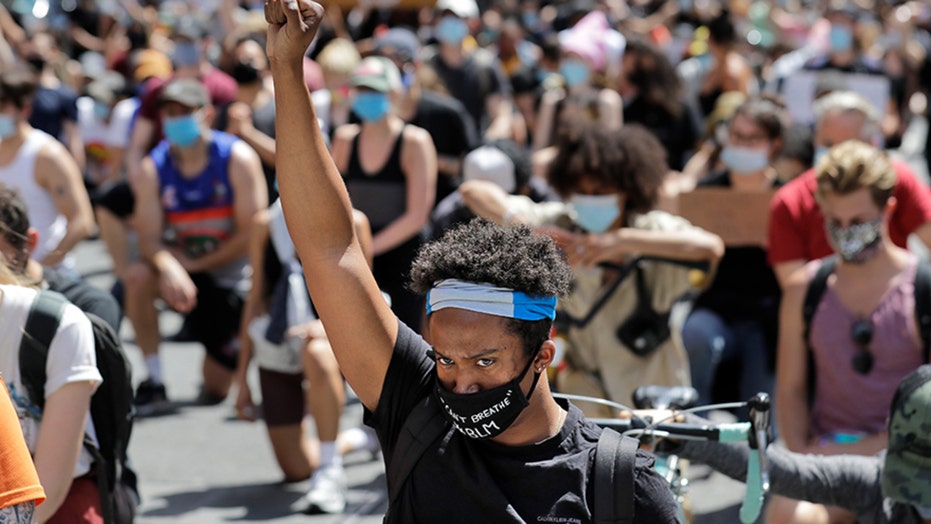 Hundreds of mourners said their last goodbyes to George Floyd on Tuesday in a packed memorial service in Houston.

Floyd, 46, who died in police custody after an officer kneeled on his neck for over eight minutes -- is set to be laid to rest next to his mother in the suburb of Pearland after six days of mourning and memorial services spanning several cities and states, including Minneapolis, Minn., and North Carolina.

Since his death on Memorial Day, thousands of people have flocked to the streets across the nation demanding the officers involved be brought to justice, and calling for sweeping police reforms to prevent the use of excessive force that activists said was predominantly targeted toward blacks and Hispanics.

Pallbearers bringing the coffin into The Fountain of Praise church in Houston for the funeral for George Floyd on Tuesday. (Houston Chronicle via AP, Pool)

BIDEN MEETS WITH FLOYD'S FAMILY AHEAD OF TUESDAY'S FUNERAL

Floyd's funeral service took place at the Fountain of Praise Church in Houston. About 500 guests invited by the Floyd family -- including a number of activists, celebrities and politicians -- attended, KHOU reported.

Rev. Al Sharpton entering the church for the funeral for George Floyd on Tuesday at The Fountain of Praise church in Houston. (Godofredo A. Vásquez/Houston Chronicle via AP, Pool)

“This will be a home-going celebration of brother George Floyd," Fountain of Praise pastor Mia K. Wright told mourners. "We may weep, we may mourn, but we will find hope."

Music was prominently featured during the emotional service. R&B singer Ne-Yo sang "It's So Hard to Say Goodbye To Yesterday," the 1990s hit from Boyz II Men, and gospel singer Dray Tate sang a rendition of "A Change Is Gonna Come."

Family members of other black people killed by police officers were also in attendance, including relatives of Michael Brown, Trayvon Martin, Ahmaud Arbery and Eric Garner.

In his eulogy, the Rev. Al Sharpton stressed the importance of equality, holding police officers accountable for misconduct and the impact of Floyd's death.

"All over the world George, they're marching with your name," he said. "Even in a pandemic, people are walking out in the streets, not even following social distancing, because you've touched the world.

The casket of George Floyd placed in the chapel for the funeral service at the Fountain of Praise church Tuesday in Houston. (AP Photo/David J. Phillip, Pool)

"And as we lay you to rest today, the movement won't rest until we get justice," he added

He also took aim at the NFL for its treatment of former quarterback Colin Kaepernick, and President Trump for his response to Floyd's death and the subsequent nationwide demonstrations.

"The president talks about bringing in the military but he's not said one word about eight minutes and 46 seconds of police murder of George Floyd," Sharpton said, referenced how long a Minneapolis police office pinned his knee into Floyd's neck. "He challenged China on human rights, but what about the human rights of George Floyd? The signals that we're sending is that if you are in law enforcement, then the law doesn't apply to you."

Biden shared a pre-recorded video message at Tuesday's funeral service encouraging Floyd's family to take on the "burden" of his death as "your purpose to change the world for better."

He appealed to Floyd's two children -- his 6-year-old daughter Gianna and 27-year-old son Quincy Mason -- and his grandchild, extending his sympathies and condolences.

"I know you miss your dad and granddad," Biden said, eliciting applause. "Little Gianna, as I said to you when I saw you yesterday, you're so brave. Daddy's looking down, he's so proud of you."

"No child should have to ask questions that too many black children have had to ask for generations," Biden added. "Why? Why is daddy gone?"

Floyd's family members, in a tearful goodbye, remembered him as a family man but pleaded for systematic change to prevent the death of blacks at the hands of police.

"No more hate crimes please," Floyd's niece said during her remarks. "This is not just murder but a hate crime"

Multiple family members painfully recalled Floyd's calls for "Momma," as he was laying on the ground restrained, moments before he died saying that his mother was metaphorically waiting for him with "open arms."

The Rev. William Lawson of the Wheeler Avenue Baptist Church in Houston spoke of Floyd's last moments and the need for change, implicitly citing Trump, whose response to the protests over Floyd's death has evoked strong criticism.

"First thing we have to do is clean out the White House," Lawson said to applause.

Pastor Steve Wells of the South Main Baptist Church praised Floyd's family and those fighting for social justice. He also had a message for churches with mostly-white congregations.

"We are better than we used to be but we are not as good as we ought to be and that is not good enough," he said, "which means you have to take up the work of racial justice. Racism did not start in our lifetimes but racism can end in our lifetime."

Following the ceremony, a horse-drawn carriage escorted by police was set to transport Floyd's body to the cemetery.

Just a day before, nearly 6,000 people holding signs and wearing "I can't breathe" T-shirts -- highlighting the words Floyd said before he died -- turned out to pay tribute to him during a public memorial service in Houston at the North Central University.

Biden was in attendance with the family at the memorial but did not attend the funeral. According to a source with knowledge of the conversations, Biden didn’t want his Secret Service protection to disrupt the service.

On Tuesday, Minnesota Gov. Tim Walz urged his state to hold a moment of silence coinciding with the beginning of Floyd's ceremony in Texas.

"The world watched in horror as George Floyd's humanity was taken away from him," Walz wrote in a state proclamation. "We will not wake up one day and have the disease of systemic racism cured. We must do everything in our power to come together to deconstruct generations of systemic racism in our state so that every Minnesotan - black, indigenous, brown, or white -- can be safe and thrive."

Weeks of protests have led dozens of police precincts and law enforcement agencies across the country to ban the use of chokeholds, tear gas and pepper spray by officers.