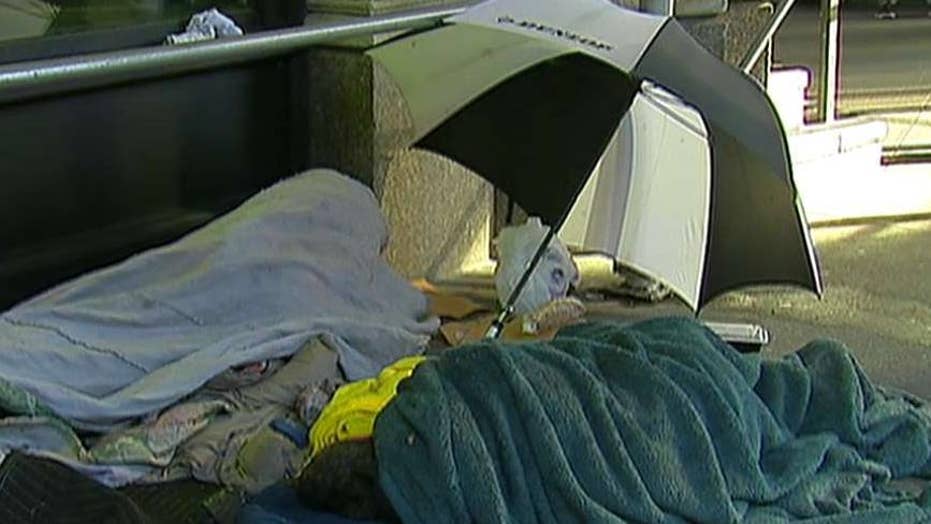 Mayor de Blasio: We want to end long-term homelessness over the next 5 years

New York City Mayor Bill de Blasio says his administration is now going “on the offensive” in its bid to tackle the Big Apple’s persistent problem with homelessness.

The Democrat, who has spent years trying to reverse the gradual rise of New York City’s homeless population, made the declaration while touring its new Street Homelessness Joint Command Center in Manhattan this week. The center, which handles calls to the city’s 311 public help number, has employees and police personnel monitoring maps and 20,000 real-time camera feeds in hopes to better address and dispatch what services the homeless may need, according to NBC New York.

“Now we’re going on the offensive,” de Blasio told the station. “We are going to take all the abilities of homeless services and the NYPD, combine them so that we are constantly engaging people on the street, winning their trust.”

As of this week, the NYC Department of Homeless Services says there are nearly 60,000 homeless people in the city’s shelters, around 21,000 of whom are children.

Homeless people sleep on a sidewalk in Manhattan in October 2019. (Gary Hershorn/Corbis via Getty Images)

In October last year, the Advocates for Children of New York group said the number of students in the city who “identified as homeless during the 2018-2019 school year remained stubbornly high, topping 100,000 for the fourth consecutive year.”

“The data, which come from the New York State Education Department, show that in the 2018-2019 school year, New York City district and charter schools identified 114,085, or one in 10, students as homeless,” it added.

De Blasio told NBC New York that the city has helped move more than 2,000 homeless people indoors over the past few years by maintaining a database of those on the streets and offering them services there.

However, the Coalition for the Homeless advocacy group is blasting his latest effort, telling Fox News in a statement Friday that it is "deeply disturbed" about the new command center.

“The Mayor’s Orwellian assurances that mass surveillance and policing of New Yorkers who are sleeping on the streets will somehow accomplish the goal of ‘winning their trust’ defies logic – in fact, repeated encounters with police officers are more likely to push people further away from services," said Giselle Routhier, its policy director. "Instead of wasting public resources on this counterproductive and chilling strategy, Mayor de Blasio should consider creating a Housing Command Center to increase access to the resources that will actually enable people to leave the streets and move into safe, stable homes of their own.”

When asked by NBC New York to address potential concerns that the network of cameras was too intrusive, de Blasio shook his head.

De Blasio also has recently come under fire for his policy to relocate homeless people to New Jersey cities like Newark. In an interview with Fox News' "America's News Headquarters" in December, the mayor said he wants the federal government to issue more housing vouchers to let people staying in shelters move into rental homes.

"The problem ultimately is Donald Trump has not shown any willingness to give us the tools we need, most especially Section 8 vouchers, which allow people to live in rental housing," he said. "That's the single-strongest piece we need from Washington that we are not getting right now."