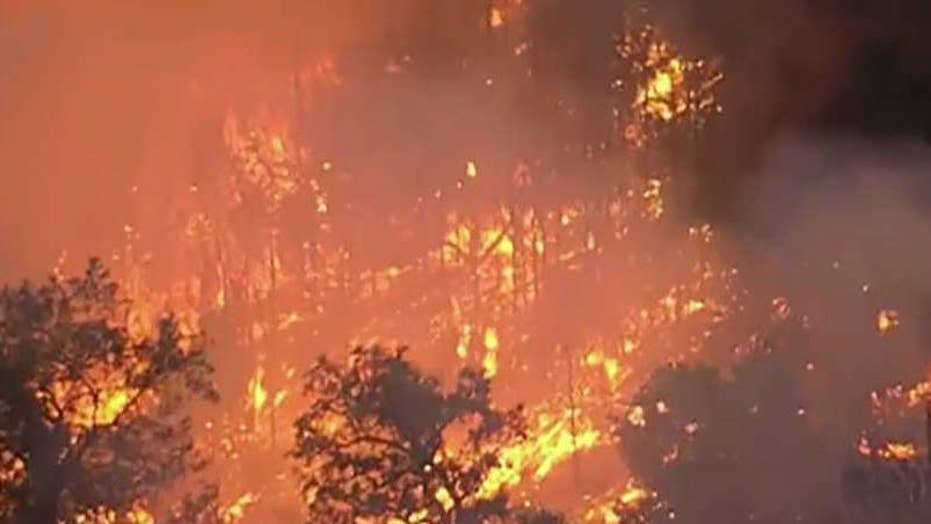 49 structures have been destroyed by the fast-moving fire in Geyserville, California; Claudia Cowan reports from the scene.

A mandatory evacuation order stemming from the Kincade Fire in Northern California expanded from 50,000 to 90,000 residents Saturday night as the state’s largest utility company, Pacific Gas & Electric (PG&E), planned to shut off power for an estimated 2.35 million residents over fears that high winds and low humidity would spread the blaze.

The entire towns of Healdsburg and Windsor in Sonoma County, north of San Francisco, were under mandatory evacuation as the evacuation zone stretched from Healdsburg west through the Russian River Valley to Bodega Bay, according to the Sonoma County Sheriff’s Department.

Winds reaching up to 75 mph or more during a “historic wind event” this weekend could help spread the fire, which has already burned more than 26,000 acres, the National Weather Service said.

The Sonoma County Sheriff's Office expects the evacuation to be the largest in more than 25 years with Sheriff Mark Essick saying it's the largest he's experienced in his 26-year career.

The sheriff cited 24 deaths from a fire in the area two years ago while urging residents in the evacuation zones to leave.

"I'm seeing people reporting that they're going to stay and fight this fire," Essick said. "You cannot fight this. Please evacuate."

A PG&E meteorologist said it’s “likely that many trees will fall, branches will break," which could damage utility infrastructure and start a fire.

PG&E started shutting off power in six phases, beginning at 2 p.m. Saturday and scheduled to end at 10 a.m. Sunday.

CalFire (California Department of Forestry and Fire Protection) confirmed Saturday evening that the fire was 11 percent contained and more than 23,500 structures were in danger.

Meanwhile, the 4,600-acre Tick Fire burning in Southern California near Santa Clarita has also prompted thousands of residents to evacuate.

The Associated Press and Fox News' David Aaro contributed to this report.